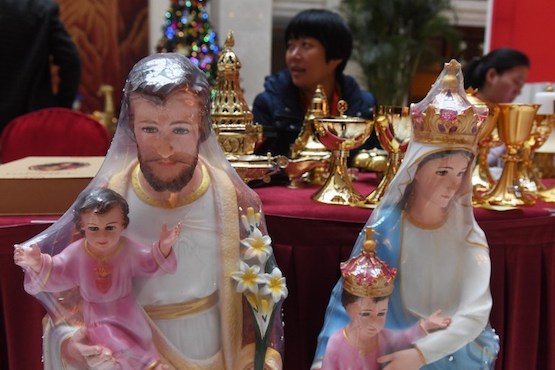 Religious statues in front of a check-in desk for the state-run Ninth National Congress for Catholic Representatives held in Beijing Dec. 26-29. (Photo by Greg Baker/AFP)

China's two government appointed Catholic bodies have released their revised constitutions with "Sinicization" as a central concept, seen as part of a broader strategy by Beijing to make all religion in the country more "Chinese."

Other changes in the appointment of senior officials finds the government-run bodies at even greater odds with standard Vatican practice, underscoring the difficult road ahead as the Holy See continues its talks with Beijing over — in the first instance — the appointment of bishops.

Specifically, "Sinicization" is now included in both constitutions.

The amendments, made during the Ninth National Congress for Catholic Representatives held in Beijing Dec. 26-29 (a controversial event unrecognized by the Vatican and held every five years) were posted on the website of the Chinese Catholic Patriotic Association(CCPA) and Bishops' Conference of Catholic Church of China (BCCCC) on Feb. 27.

The changes were made in the first three chapters, namely the Preamble; Scope of Mission; and Organizational Structure and Creation and Dismissal of Personnel in-charge.

In the Preamble of both organizations, the phrase "insist on the direction of Sinicization" was added to their aims along with the existing slogan for an independent and self-support principle in running the church.

Catholic commentator Yu Si told ucanews.com that "inculturation" means blending local culture to fit in with church doctrine while "Sinicization" was changing church doctrine to fit in with party politics. This has been despite an insistence from officials in national church bodies who maintain that "inculturation" and "Sinicization" are one and the same, Yu said.

Sinicization was a key word in President Xi Jinping's speech at the National Conference of Religious Works in April 2016 and it was seen as sending the message that religions must embrace the Chinese characteristics of socialism while upholding the Party's primacy.

The People's Daily, a state-run media outlet, published three articles in July, reiterating the importance of Sinicization and asking religious groups to "resist control from a foreign version of the same religion." As part of that, the Party sees Roman Catholicism as "foreign" while Catholics in China themselves are not.

Within the revised constitutions there are now new standards being made on leaders of both of the two national church bodies. Observers see these restrictions — such as limits on holding office — as further forms of control by the state.

Previously the CCPA and BCCCC only needed to "report the changes" of leadership to relevant government departments. In the revised constitutions, they will have to report the changes for the authorities to "review and approve."

If the existing president resigns or is impeached and has to step down, the acting president of either organization will no longer be "elected" but will be "selected." This change is in place because the authorities fear that even if they have a president that fits their requirements, the Vatican might instruct the other bishops to overturn the existing president and put a Vatican approved official into that position.

"Selection means the authorities or the national church bodies will designate a few candidates for their members to choose from. It is a different concept from election where you can choose whoever you want," Ruo Wang, a layman in northern Hebei province, told ucanews.com.

Father Joseph, an underground priest blogger in China, said: "The two changes will prevent underground bishops taking a lead in the bishops' conference if they are subsequently recognized by the government under an agreement with the Holy See."

First they create an initial hurdle through designating the candidates for selection in case the existing president is forced to step down, and then the selected candidate needs to go through a further hurdle in getting approval from the authorities, he said.

Selection of honorary presidents and advisors

Bestowed for only one term, the honorary presidents and advisors would attend the joint meeting of the CCPA and BCCCC.

Father Joseph said that by dropping the requirements, the authorities could now add an individual at the upper levels of the CCPA-BCCCC if they disapprove of the performance of existing leaders. The priest this demeans the bishop’s conference if a lay honorary president is placed above them.

In the Eighth National Congress, Anthony Liu Bainian, a layman dubbed as the "black pope of China" for his immense influence in the China church, was made an honorary president of both the CCPA and BCCCC, along with Bishop Aloysius Jin Luxian of Shanghai.

Both constitutions have also reduced the age ceiling of CCPA and BCCCC leaders from 75 to 70 years.

In the Scope of Mission for both constitutions, the CCPA replaced the phrase "assisting the clergy" to "assisting the church affairs organization" to improve parish work. It also added the words "mutual respect" in their mission to carry out friendly exchanges with Catholic communities in Hong Kong, Macau, Taiwan and around the world.

According to the Basic Law for Hong Kong and Macau, relations between religions in mainland China and their counterparts in the two special administrative regions "should be based on the principles of non-subordination, non-interference and mutual respect."

Father Joseph said this "means a line of non-interference has been drawn between exchanges with the church in China and outside, including the two administrative regions on Chinese soil. This is also an emphasis on the status of the CCPA."