French police suspect arson was cause of fire at Nantes cathedral

The blaze broke out in three places in the Cathedral of Sts. Peter and Paul July 18 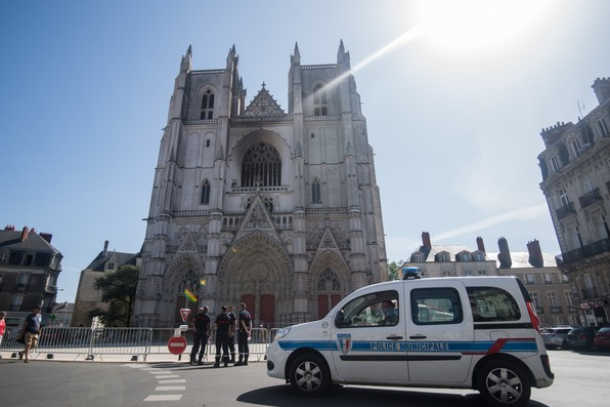 Firefighters stand in front of Saint-Pierre-et-Saint-Paul cathedral in Nantes, western France, on July 20, 2020, two days after a fire broke out in three places at the gothic cathedral of Nantes in western France, destroying stained glass windows and the grand organ and sparking an arson investigation.
(Photo: Loic VENANCE / AFP

French police have opened an arson investigation into a fire at a Gothic cathedral in Nantes.

The blaze broke out in three places in the Cathedral of Sts. Peter and Paul July 18.

Although more than 100 firefighters contained the blaze within two hours and stopped it from spreading to the main body of the church, a 17th-century choir organ at the west end of the building was destroyed with much of the choir area and multiple stained-glass windows.

The mayor of Nantes immediately announced a criminal investigation into the fire because it appeared to have started at multiple locations.

A volunteer at the cathedral was questioned and released by police.

The cathedral in Nantes is considered to be a jewel of French architecture. It was begun in 1434 and completed only in 1891. The French government has designated it as a historic monument because of its architectural significance.

The blaze was the second at the cathedral in less than 50 years. In 1972, a fire destroyed so much of its roof that it took 13 years before repairs were completed and it could reopen to the public once more.

Laurent Ferlay, the regional fire chief, told French media that the damage to Nantes cathedral was not as grave as that caused by the previous fire nor comparable to damage caused by the fire at Notre Dame in Paris in April 2019.

French Catholic leaders announced their shock and sadness via social media soon after the fire broke out.

"I am saddened to learn of the fire at Nantes cathedral," Archbishop Eric de Moulins-Beaufort of Rheims, president of the French bishops' conference, tweeted.

"I salute the work of the firefighters," he continued. "This building, which expresses the soul of a city, is bruised. May the faith, hope and charity which it signifies make us live them (the theological virtues) ever more."

He said on Twitter July 18 that a "burned cathedral is not an ordeal we would have liked to have experienced again."

He added: "I sincerely thank the firefighters who once again showed courage and pray for them as well as for those who, in Nantes, Catholic or not, are affected by this new drama."

The French bishops later collectively called on Catholics of the country to unite in prayer in support of the Nantes Diocese, which covers an area of France's Atlantic coast.

In a statement published on the conference website July 18, the bishops said, "It is not only a part of religious heritage which is destroyed but also a symbol of the Catholic faith which is damaged, wounding the hearts of all those for whom these buildings are places of prayer, spiritual refuges, landmarks for their faith."

It said Macron stressed "the link which unites the national community to the Catholic community in the face of this new tragedy."

Archbishop de Moulins-Beaufort told Macron the fire "made the implementation of the security plan" for the 86 cathedrals of France ever more urgent.

The French Catholic Church and the French government had discussed the action plan at a meeting March 9, the statement said.