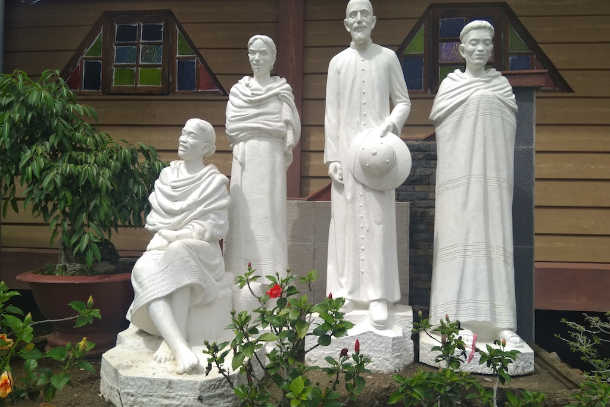 Statues of Bishop Jean Cassaigne and K’hor lepers by the chapel at the leprosarium. (Photo: UCA News)

James K’Beo gathers his children and grandchildren on Sundays at his old wooden home where they have meals, rest and say prayers together. They have maintained their cherished family tradition since the late Bishop Jean Cassaigne (1895-1973) was alive.

“We try to do our own work on weekdays and have to spend Sundays gathering for worship and family get-togethers. We do what the bishop taught us. That’s it,” K’Beo, who worked closely with Bishop Cassaigne for a decade, says proudly.

The French missionary offered a pre-marriage course to him and his wife before presiding at their church wedding ceremony.

“He encouraged us to teach our children how to practice the Christian faith and work together for a happy family. Memories of his words and services remain engraved on my mind,” says the 79-year-old K’Hor father of eight while flicking dust off a white bust of the late Bishop Cassaigne with a cloth on a regular basis. The life-size bust, which was given to him by a sister, stands on a wooden pedestal in his living room.

In 1958, Bishop Cassaigne arranged for a car to carry K'Beo's parents and three younger siblings from their home province of Dak Nong to Di Linh Leprosarium in Lam Dong province. His parents were afflicted with leprosy or Hansen’s disease, which deformed their limbs.

The member of the Society of Foreign Missions of Paris established the leprosarium in 1929 with the first 21 K’Hor lepers who had been abandoned and discriminated by their villagers or relatives, offering them medicine, food and shelter. Disease-free children lived in hostels and visited their parents on weekends.

K’Beo looked after his grandparents until their deaths five years later and was moved to the leprosarium, where he acquired carpentry skills. He and other people erected over 30 houses and created furniture for lepers’ families who lived around the leprosarium.

“Our bishop had great love for us, received our contagious disease and lived as a saint among us, people abandoned by society,” he said. “He was gentle, always smiled and treated all people with respect and love.” 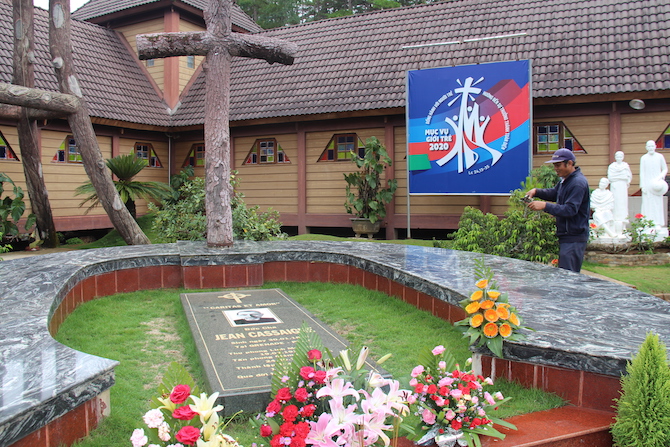 The tomb of the late Bishop Jean Cassaigne by the chapel in the leprosarium. (Photo: UCA News)

Father Cassaigne was assigned to serve the K’Hor ethnic group at Di Linh Mission Station in 1927, one year after his arrival in the country. He gathered and cared for ethnic lepers who were abandoned by their relatives or neighbors and lived separately in forests.

He was named bishop of Saigon (now Ho Chi Minh City) in 1941 and stepped down in 1955 after finding himself infected with leprosy. He returned to serve lepers in Di Linh until his death in 1973. He was buried at the leprosarium and fulfilled his deepest wishes.

The priest, who is praised as an apostle of lepers, invited Daughters of Charity of St. Vincent de Paul sisters to work at the leprosarium in 1936 after the number of patients increased rapidly.

K’Beo recalled that the French priest started his daily work at 4am, celebrated Mass, visited patients and their households, recited the rosary at the local cemetery and the chapel, told jokes and played dominoes with patients’ relatives. He offered sweets to those who won or lost the games.

Bishop Cassaigne respected ethnic language and culture. “He refused to teach French to local youths, saying ‘I am an ethnic and speak only K’Hor language,’” he recalled. He allowed local people to butcher cattle and held parties on Catholic feasts and festivals.

The leprosarium helped change the lives of countless ethnic lepers. His parents were well tended and given proper medicine and good living conditions, and consequently lived to over 80. Patients who lived outside the leprosarium died young of their illness and poverty.

Lucia K’Jiu, who is 90 and the oldest resident of the leprosarium, says the missionary received and looked after her and her parents since she was a child.

“We were deeply moved by his care. He visited and offered us cake and fruits in the afternoon,” says K’Jiu, a mother of nine who has deformed feet. One of her children is a nurse who serves at a dispensary.

“What we have today is from our bishop’s love and care,” she says, adding that he built houses for them and provided land for them to cultivate coffee, tea and other crops. 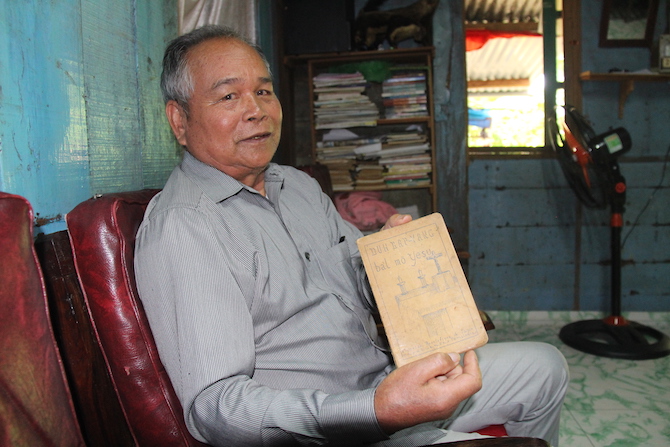 John K’Bis shows an old copy of the Bible in Latin-K’Hor composed by Bishop Jean Cassaigne at his home in the leprosarium. (Photo: UCA News)

John K’Bis had his life changed when he was admitted to the leprosarium in 1961 when he was 15.

K’Bis, who was cured and baptized by the missionary, says the bishop taught him Latin and the K’Hor script. He served as an altar boy for 11 years and helped teach the catechism to others.

“Bishop Cassaigne was a rosary devotee who recited at any time, even when he was in bed for his painful leprosy,” says K’Bis, who worked as his assistant. “When he could not bear the pain, he entreated ‘Mary, save me’ instead of crying loudly.”

“I was with him when he departed this life. He opened his eyes and took my hands even though he had breathed his last. I closed his eyes and after that my lingering stomach problems ended. I believed that he healed me,” he says.

The K’Hor villager retains some gifts given by the late bishop, including an old copy of the Bible in Latin-K’Hor, a picture of them and a smoking pipe. “These souvenirs remind us of our benevolent father.”

The missionary studied and romanized the K'hor language and published a French-K’hor-Vietnamese dictionary in 1929 and K’hor Customs in 1937 and Catechism for K’hor in 1938. He translated the Bible and hymns into the local language

He baptized the first local ethnic leper in 1927.

“He offered good opportunities for local lepers to enjoy education, health care and a better life and embrace Catholicism,” says K’Bis, whose children graduated from local colleges and work as teachers and nurses.

Four doctors and six nurses who are from local lepers serve at the leprosarium with 80 families living on a hill of 40 hectares. They have a church where a priest holds daily Masses.

Joseph K’Chiu, who has served local lepers for 14 years, says he is deeply grateful to the nuns who provided scholarships for him to pursue his studies. His parents suffering the disease received loving care from the bishop and nuns.

“I feel the physical and emotional pain of lepers, so I try my best to care for them well and bring the good bishop’s inspirit of tender care to them,” he says while washing the wounds of a leper. The leprosarium offers free health care to lepers from other places and many patients still do not fully understand the disease.

In October 2019, Bishop Dominic Nguyen Van Manh of Da Lat told the lepers that Vietnamese bishops had started the necessary preparations to open the sainthood cause of Bishop Cassaigne.

Since then, some priests and experts have visited and collected information and evidence on him at the leprosarium.

Local families daily recite a prayer for the sainthood cause because they believe that he really was a saint. In the past they suffered severe drought and prayed to him, and consequently it rained.

“Our bishop is still present among us even though he passed away 47 years ago,” says K’Beo, adding that they always pray in front of his tomb for their important issues.