Bishop Rene Marie Albert Dupont, 93, has served in South Korea as a missionary since 1954 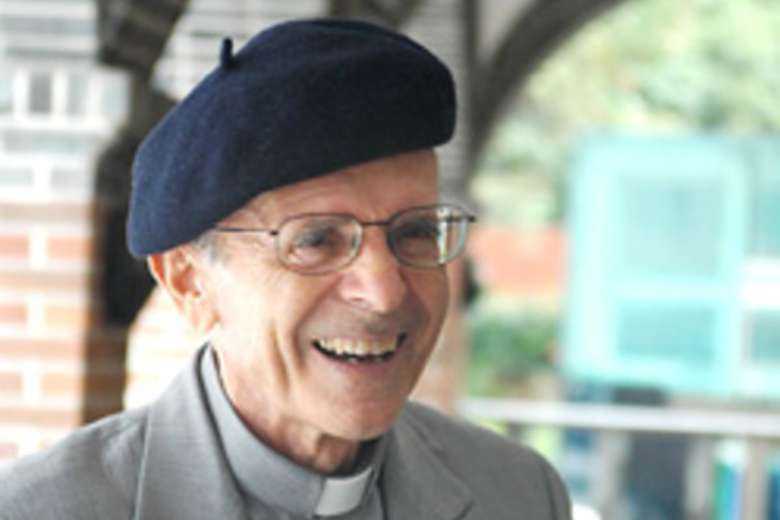 Bishop Rene Marie Albert Dupont, 93, the first bishop of Andong in South Korea, has spent of his life in the East Asian nation. (Photo: www.hani.co.kr)

Bishop Rene Marie Albert Dupont is a 93-year-old with bright eyes and a ready smile who never tires of meeting and talking to people.

The French missionary from the Paris Foreign Missions Society (MEP) now lives a retired life in Andong Diocese of South Korea after spending nearly seven decades in the East Asian nation. He is one of the most senior foreign missionaries still alive in Korea.

In between his daily routine life, the first bishop of Andong spends hours in prayers and meditation at his retirement home. He also makes time for a daily medical check-up.

“The world is good because God has provided us everything. God has nothing but love, and he helps us not be anxious but to remain free,” Bishop Dupont told Catholic Times during a recent interview.

He beams when people visit him and talk to him. He asks them many questions about their lives. After each answer he nods with “thank you” with a broad smile.

“I have so much free time, so I feel good when people come to visit and talk to me,” he says.

“Life has been like an eternal spring that keep flowing with God’s love. I have been always blessed with God’s abundance of grace”

Bishop Dupont says that he never thought of becoming a priest a child, but he is grateful to God as he has lived a “happy and proud” life in the presence of God thanks to his long life in prayer and service as a missionary.

“Life has been like an eternal spring that keep flowing with God’s love. I have been always blessed with God’s abundance of grace,” the bishop says in fluent Korean.

When asked what his favorite Korean food is, the bishop replied: “Anything is good to eat that is given to you. You must enjoy it with gratitude.” Sometimes he also joins the cook in preparing rice and soup for lunch.

The elderly clergyman recently became a media sensation after a TV channel broadcast a documentary on his life. Guests and reporters from various parts of Korea including Seoul, Busan and Jeju continue to visit him every day.

“Some visits are for interviews and others are fraternal visits. Some drop in to spend some time with me and take a picture with me. Some visitors enquire about my health and express wonder that I am still healthy,” he said.

The bishop says he keeps the door of his room open 24 hours a day. About half of his visitors are non-religious and they don’t even talk about religious topics. He offers snacks to all his visitors.

“They just come to talk to me. Often, they don’t seek solution or advice for any problem. I too enjoy talking to them. In fact, a priest is someone who must welcome all and listen to everyone.”

When Andong Diocese celebrated its 50th anniversary in 2019, it produced a special documentary on the life and works of Bishop Dupont, who played a vital role in developing the diocese

He was ordained a priest on June 29, 1953. He then studied at the Pontifical Gregorian University in Rome in 1954. In December of that year, he landed in Korea to work as a missionary, just a year after the end of the Korean War.

In 1969, he became the first bishop of Andong, the smallest Catholic diocese in Korea that grew with Christian refugees who settled in this largely rural area to avoid persecution.

With the help of a few priests, Bishop Dupont undertook a range of pastoral and social initiatives to strengthen the local church and community in Andong. He founded schools, a college and hostels to provide education to children in 1972.

In 1974, he set up Damian Dermatology Clinic for the early diagnosis and treatment of leprosy, also known as Hansen’s disease.

Bishop Dupont resigned in 1990 on reaching the mandatory retirement age.

When Andong Diocese celebrated its 50th anniversary in 2019, it produced a special documentary on the life and works of Bishop Dupont, who played a vital role in developing the diocese.

“Andong has changed so much in the 50 years, from seven parishes to 39 today. It might be the smallest diocese in Korea, but it has a very friendly atmosphere. Everyone knows each other"

In his message to nearly 52,000 Catholics in 39 parishes on the occasion, Bishop Dupont said was very happy and proud to be a part of the church’s journey and growth.

“Andong has changed so much in the 50 years, from seven parishes to 39 today. It might be the smallest diocese in Korea, but it has a very friendly atmosphere. Everyone knows each other,” he said.

The prelate has received various awards for his contributions to Korean society.

In 2019, he was accorded two prestigious national awards — Immigrant of the Year from Korea’s Ministry of Justice and the Paiknam Memorial Association (PMA) Award.

The PMA said the bishop was honored for his immense contributions in the fields of education, social development in farming and fishing villages, medical and relief projects in Andong and other parts of Korea since his arrival in 1954.

Although Bishop Dupont retired more than three decades ago, he has continued to take part in diocesan activities at the request of his successor bishops.

The missionary says he has experienced how drastically Korea has changed socioeconomically in the past decades, but he sees still many people to look at the church for various kinds of support.

Bishop Dupont often tells clergy and religious the importance of an open heart for all. “We should keep the door open for all, always be with people and listen to them for their wants and needs whenever they come to us,” he said.