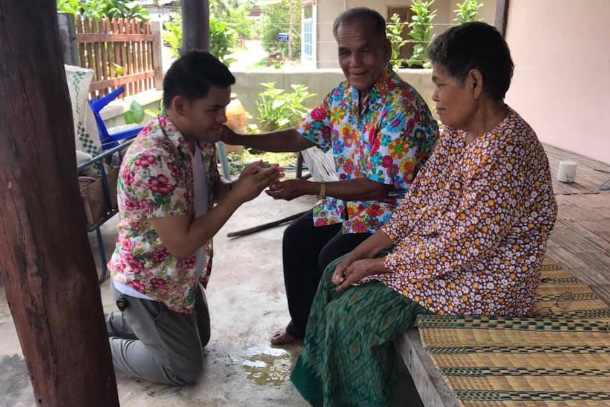 Thai Father Pattawi Wongsikaew seeks the blessings of his parents in their village house in northeast Thailand before leaving for Paris for his studies in January. (Photo: Eglises d'Asie)

Share this article :
A young Thai priest studying in Paris says the opportunity will help him learn intensely from the work of French missionaries and rekindle the missionary zeal in his native diocese.Father Pattawi Wongsikaew comes from northeast Thailand's Ubon Ratchathani Diocese, where two members of the Paris Foreign Missions Society (MEP) took the Catholic faith in the late 19th century.Father Pattawi, who arrived in Paris on March 10, said he preferred France to the Vatican for studies "because of the historical relationship between my diocese and MEP."MEP Fathers Constant Prodhomme and Xavier Guégo, who arrived in Thailand in January 1881, dedicated their lives to evangelization in the Southeast Asian country."The MEP fathers were indeed the first to sow the seeds of faith in the country. Father Prodhomme and Father Guégo played a significant role in the creation of the first Christian communities" in northeast Thailand, Father Pattawi said.
Related News The priest plans to devote a year to learning French at the Catholic Institute of Paris before beginning his licentiate in theology.He said MEP missionaries' activities were not limited to evangelization but also involved fighting the slave trade, which was already illegal in the 19th century.His studies in France will help him better understand the first missionary priests who worked in his diocesan area through their writings and archived historical documents, he said."This is an excellent opportunity to discover a country where these missionary fathers lived — the place where their apostolic zeal germinated and the fire of the mission that continued to burn in their hearts until their last breath," Father Pattawi said.The priest spent some time at the MEP house in Bangkok to learn the French language. "Many things struck me there, particularly the MEP hospitality to the poorest and the parish life of the French-speaking Catholic community," he said.MEP priests look after a French-speaking parish in Bangkok, where the priest said he had discussions with French Catholics."The exchange between priests and parishioners at the end of the Sunday Mass was a novelty for me. I always ask myself what I need to do to have such exchanges," Father Pattawi said.He said the MEP priests are "an example par excellence" of learning foreign languages that have no connection with their native tongue.Although he picked up some French, "I must confess that I don't understand much of the discussions at the table," the priest said.He said the lack of missionary zeal was the biggest issue for his diocese, where "the Christian communities are the legacy of the French missionaries."Although communication and transport are no longer difficulties for evangelization, "the lack of a heart to announce the Good News" remains the biggest challenge, he said.The studies and experience acquired in France "will allow me to enter more deeply into the hearts and minds of modern Thai people," he said.