French bishop hailed as 'friend of Buddhists' in Cambodia 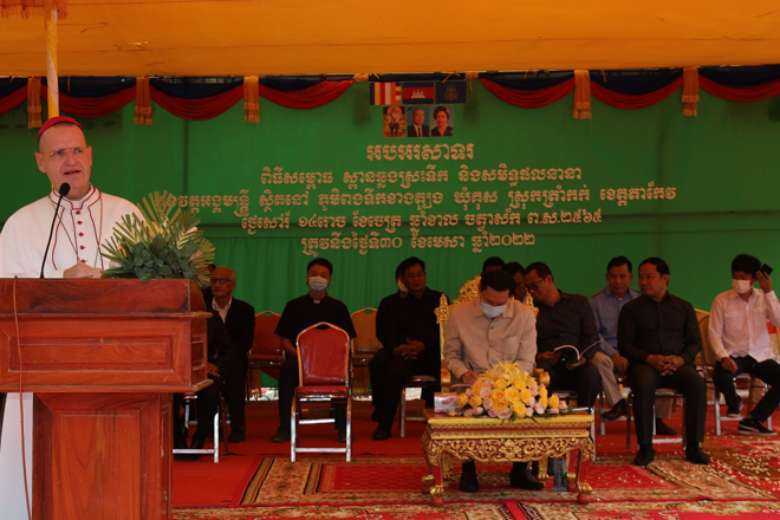 Bishop Olivier Schmitthaeusler, apostolic vicar of Phnom Penh, speaks during an event at Ang Montrey Pagoda where he was honored for his support of the Buddhist community. (Photo: Catholic Cambodia)

Buddhist leaders in Cambodia have honored French Bishop Olivier Michel Marie Schmitthaeusler for his years of support and donations to local Buddhists and a popular pagoda.

Bishop Schmitthaeusler, the apostolic vicar of Phnom Penh, received the accolade “a great Buddhist supporter” at an event at Ang Montrey Pagoda in Tram Kak district of Takeo province in southern Cambodia on April 30, reported Catholic Cambodia, the communications wing of the local Catholic Church.

Seng Somony, secretary and spokesman of the Ministry of Cults and Religions, presided over the ceremony and handed a certificate of honor to Bishop Schmitthaeusler issued by the Mahanikaya Council of Cambodia, the country’s supreme Buddhist council.

Venerable Nget Chamroeun, the abbot of Ang Montrey Pagoda, told the gathering that as a priest and bishop the French missionary has extended a helping hand to Buddhists that enabled them to have vegetable gardens and ponds and to construct bridges among other things.

Bishop Schmitthaeusler, 51, a member of the Paris Foreign Missions Society (MEP), said he was humbled by the honor and expressed his gratitude to Buddhist leaders for their support in helping the Church thrive in the area.

"This honor, I understand, is not for myself but a recognition for the Catholic and Buddhist communities as they walk together. The recognition also affirms that the local Catholic community is rooted in Cambodian culture. This is a very special occasion that highlights real fraternity between religions,” he said.

“We travel together as brothers and sisters, and during the era of Covid-19 we have an opportunity to strengthen our relationship. This is how we can walk together to establish peace"

Bishop Schmitthaeusler recalled that when he first arrived in Chamkar Teang village in Takeo province in 2002, there was only one Christian. One of his first projects was to help build a 1,200-meter road to connect the village with Ang Monrei Pagoda.

The prelate said the Church had also opened education institutes in the area. Slowly, a Catholic community has grown and flourished. The Church also introduced handicraft projects that allowed people to find jobs and preserve Khmer traditions.

“We travel together as brothers and sisters, and during the era of Covid-19, we have an opportunity to strengthen our relationship. This is how we can walk together to establish peace,” the bishop added.

Bishop Schmitthaeusler said he has maintained friendly relationships with five abbots of the pagoda since 2002.

Seng Somony, a government official, said he was surprised and elated that a Catholic bishop had become a symbol of unity between two religions through his great works.

"Religious harmony is very important, and we must sustain it. The bishop has shown that Christianity is not a biased religion and it can work together with other faiths. It proves that we follow our faiths with the same goal: bringing peace to humanity. Nothing should hold us back,” he said.

Somony handed over a special face mask to Bishop Schmitthaeusler as a token of appreciation.

The honor for the French bishop comes less than two months after he received the National Order of Merit medal for his decades of seminal efforts in social development on March 8.

Catholicism in Cambodia dates back to the 16th century thanks to the arrival of Portuguese Dominican friar Gaspar da Cruz in 1555.

Despite the efforts of missionaries and French colonization of Cambodia in the 19th century, Christianity was unable to become a strong force in the Buddhist-majority country.

However, in the 1950s, the Vatican estimated that Catholics in Cambodia numbered about 120,000, with some 50,000 being ethnic Vietnamese.

Catholicism nearly died out in Cambodia during the long-running civil war and genocidal Khmer Rouge regime that left at least 2 million people dead.

The missionaries returned after the end of the civil war in the 1990s and the Church was reborn from the ashes. Today, Christians make up less than one percent of an estimated 17 million people in Cambodia.

About 20,000 Catholics live in three church jurisdictions — the apostolic vicariate of Phnom Penh and apostolic prefectures of Battambang and Kampong-Cham.