Monks and nuns in the Provence-Alpes-Cote d’Azur region of southeast France plan to sell 15,000 bottles of wine this month to help families cope with the losses suffered during the Covid-19 pandemic. (Photo: Learn Religions)

The Benedictines are banking on the first papal vineyard in France to help the distressed families of local wine growers during the coronavirus pandemic.

On a hill in the Rhone Valley, the monks and nuns of the abbeys of Le Barroux toil together with the local wine-making community to cultivate the vineyard established by Pope Clement V in 1309.

Through their Via Caritatis, the monks and nuns in the Provence-Alpes-Cote d’Azur region of southeast France plan to sell 15,000 bottles this month to help families cope with the losses suffered during the Covid-19 pandemic.

Via Caritatis is selling red, white and rosé wines which have many takers in the United States and others parts of Europe.

The monks said they chose the name Via Caritatis because “wine is a symbol of charity and also the charity of Christ who gave himself.”

The monks and nuns work in their respective vineyards, about 25 hectares in total.

These delightful wines are created with a deep respect for nature, using sustainable processes

At least seven or eight of them work on a daily basis in the vineyard. During the harvest, the entire team is engaged in the work.

Around 80 families directly depend on the winery for their livelihood, Father Michael, an American monk attached to the French abbey for more than 30 years, told Catholic News Agency on June 5.

“These families around us were making good wines, especially because we have the soil that is capable of producing … great wine, if it was cared for properly …,” the Benedictine said.

“These delightful wines are created with a deep respect for nature, using sustainable processes,” the Saint Pio Foundation, a charity organization inspired by the spiritual charism of Saint Pio of Pietrelcina, which has joined hands with the abbey, said in a statement. The monks who are making a mint out of ink 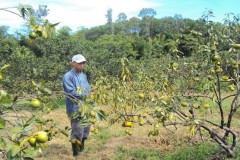 The Mediterranean climate of the south of France and the different types of soil help them churn out grand wines.

The monk’s thrust on rich papal heritage of their land was rewarded in 1973, when they bagged the status of AOC Ventoux (Protected Designation of Origin).

Via Caritatis’ full range includes nine bottles of red, white and rosé wines, separated into three ranges whose names are attached to the Benedictine liturgy.

The monks themselves do the manual labor in the vineyard.

“The monks try and strive to produce something capable of making them not dependent on others,” Father Michael added.

They give a part of the income to the poor and charitable organizations.

Each part has its own charm, I mean, each work is different

Father Michael works with a tractor along the steep slope, and does the pruning in the vineyard in the calm of winter.

“Each part has its own charm, I mean, each work is different …,” he said.

The monks have roped in Philippe Cambie, one of the world’s leading oenologists, who study wine and wine-making. It has reaped rich dividends as Cambie teaches new skills to the locals.

After moving the papacy from Rome to Avignon in 1309, Pope Clement V in 1309 settled for the Benedictine monastery of the Groseau in Malaucène, a small village adjacent to Le Barroux, as his vacation resort.

The straw wine churned out in the abbey was also appreciated by his successor, Pope John XXII.