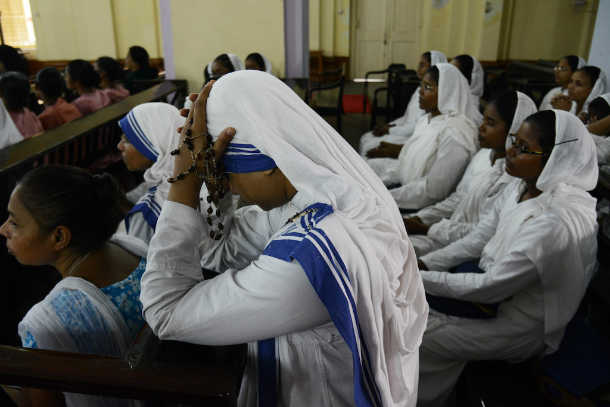 Missionaries of Charity nuns attend a Mass to announce St. Teresa of Kolkata as a co-patron of the archdiocese at the Cathedral of the Most Holy Rosary in Kolkata in September 2017. (Photo by Dibyangshu Sarkar/AFP)

Indian officials are seeking to freeze bank accounts of the Missionaries of Charity, founded by St. Mother Teresa of Kolkata, following the arrest of a nun on child trafficking charges in Jharkhand state.

State police chief D.K. Pandey wrote to the federal home secretary on July 11 urging the freeze to facilitate an investigation into whether there were violations of regulations covering acceptance of foreign funding.

Police are probing wider activities of the Missionaries of Charity home for unwed mothers in the wake of both a staff member and the nun being arrested. A childless couple had filed a complaint in relation to a cash payment they made to adopt a baby.

Police are also now working with tax officials to check income sources and spending of the charity home, according to newspaper reports.

However, Missionaries of Charity spokesperson Sunita Kumar told ucanews.com on July 12 that the broadening of investigations was a deliberate attempt to malign the work of the home for unwed mothers.

She added that there was an intention to "harass and financially trouble" the congregation that St. Mother Teresa founded in 1950.

"Our activities, resources and funding are known to the government and there is nothing for us to hide," Kumar told ucanews.com.

Prabhkar Tirkey, national president of the ecumenical Christian forum Rashtriya Isai Mahasangh, said the government move was nothing but a "witch hunt" to tarnish the entire Christian community and their charity work benefiting millions of poor people.

Father Peter Martin, who is a lawyer as well as a priest, said foreign donations came into a single Missionaries of Charity account and that funds were distributed for use in various charitable undertakings.

The police chief's letter to federal officials said that, from 2006 to 2017, congregation nuns, brothers and priests received 9.272 billion rupees (US$142 million).

"Their books are audited annually as per the law and the details filed with the government," Father Martin told ucanews.com. "If there was any anomaly or misleading transaction, the revenue department should have raised concern. But nothing of sort has happened. This move is absurd."

Missionaries of Charity nuns run over 770 houses around the world, including 243 in India, to serve the destitute, dying, unwed mothers and orphans as well as the mentally and physically challenged.