An Indian Catholic priest, who arrived home last week after being freed from 18 months of captivity in Yemen, has been named as this year's recipient of the Mother Teresa Award for Social Justice.

Salesian Father Thomas Uzhunnalil, will receive the award from the Harmony Foundation, a Mumbai-based group.

Abraham Mathai, founder of the group, told ucanews.com on Oct. 2 that the priest had been chosen as his life exemplifies the theme of this year's awards.

"Compassion Beyond Borders — a compassionate response to the refugee crisis," is the theme this year, Mathai said.

Father Uzhunnalil was released on Sept. 28 after 18 months of captivity in Yemen, where a civil war between government forces and Houthi rebels has killed more than 8,500 people since 2015, according to the U.N.

Suspected Islamic terrorists kidnapped the priest in March 2016 during an attack on a home for the elderly operated by Missionaries of Charity nuns in Aden. The militants gunned down 16 people including four nuns. The priest served as chaplain at the home.

Father Uzhunnalil "had the option of leaving Yemen in 2015 but he chose to stay and provide humanitarian aid in the midst of such terror," Mathai said.

The award recognizes his "dedication and commitment towards working in a place of great danger where his colleagues were murdered in cold blood," Mathai said.

The Mother Teresa Memorial Awards for Social Justice was introduced in 2005. It is the only award in the world bearing St. Mother Teresa's name and is endorsed by Sister Mary Prema, the second successor of St. Mother Teresa, who founded the Missionaries of Charity congregation. 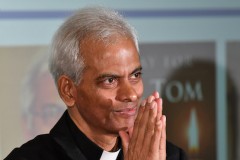