Concern mounts for remaining hostages in hands of Marawi militants 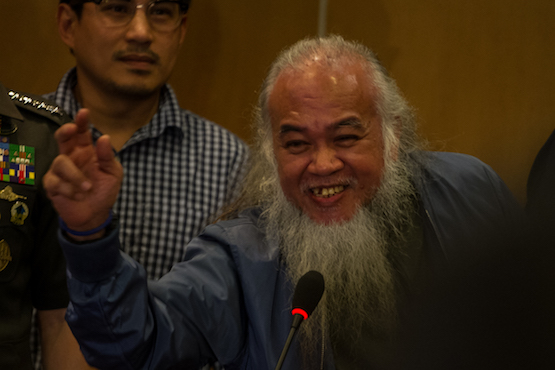 Bishop Edwin de la Pena of Marawi has assigned a caretaker team to take over programs and services of a senior Philippine priest rescued from IS-inspired militants after almost four months of captivity.

Duyog Marawi, the social action center of Marawi Prelature, said vicar-general Father Teresito Soganub and other hostages will need a long period of healing after their ordeal.

A combination of priests, lay missionaries from the Redemptorist Missionaries, Caritas Cebu, and the Capiz Archdiocesan Social Action Center will assume responsibility for Father Soganub’s chaplaincy, education, interfaith and peace building programs at the Mindanao State University, it added.

In a separate statement released on Sept. 19, Bishop de la Pena said the priest would undergo gradual reintegration. He said healing and reintegration would be offered to all hostages who seek help, regardless of faith.

"I am physically strong and sound," Father Soganub said at a press briefing on Sept. 18, in Camp Aguinaldo, the national military headquarters.

He asked Filipinos to pray for the remaining hostages.

The bishop thanked the government for the rescue but raised concern for the other hostages.

"We cannot say that we are happy, knowing that there are still many hostages that remain in captivity, that 360,000 internally displaced persons still suffer and long to go home, and that hundreds of thousands of people grieve for the loss of their beautiful, beloved city,”" he said.

Bishop De la Pena expressed hope that Father Soganub’s release would be followed by the rescue of the remaining hostages, “many of them women."