Catholic youths learn how to make organic fertilizer during a gathering held from June 4-7 by Franciscan priests at the Franciscan Eco-pastoral Center in Flores. (Photo supplied)

Along with 250 Catholic youths from all five parishes served by the priests in the region, she took part in a spiritual discussion and skills training programs on how to make organic fertilizers from natural ingredients and to conserve water as well as visiting the sick.

There was also the planting of thousands of trees in two hilly areas in Manggarai district, where illegal logging was once a serious environmental threat.

The teen from St. Francis of Assisi Church in Tentang, West Manggarai district, said the gathering was truly beneficial. "I gained new experiences. Now I’m aware of the need to protect the environment," she said, promising that she will encourage other youths to do so.

Another youth, Jakobus Jefrianus Sandi, a 26-year-old parishioner of Christ the King Church in Pagal in Manggarai district, was impressed by the one-day tree planting activity and promised to introduce similar activities in his own parish.

The gathering, during which participants were asked to reflect on Pope Francis’ 2015 encyclical Laudato si’ (On Care for Our Common Home), was part of efforts by the Franciscan priests to provide youths with more intensive empowerment programs — one of their resolutions made during a recent commemoration marking 90 years since the Franciscans first came to the country.

"We focused on agricultural and environmental issues as most young people on Flores Island are farmers or come from farming families,” said Father Wolfhelmus Apriliano, who is in charge of the Catholic youth program on the island.

“They are expected to be the next generation to take care of the environment.” 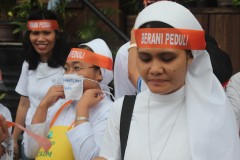 According to Father Mikhael Peruhe, provincial superior of the Order of Friars Minors in Indonesia, similar empowerment programs are being held in other regions and tend to focus on issues thought as being more pressing in that area.

As such, they focus on agriculture and environmental preservation on Flores Island and on interfaith dialogue in the capital Jakarta, where religious politicization and extremism have become major concerns since the city’s 2017 gubernatorial election that saw Christian governor Basuki Tjahaja Purnama ousted from office and jailed for blasphemy after mass campaigns by Islamists.

On Kalimantan Island, the programs focus on spiritual accompaniment as many youths in the region are migrants who work on palm oil plantations.

“Our targets are youths who care for the environment, marginal groups and interfaith dialogue as these form the core of the Franciscans’ mission,” the priest said. “We want to be with them in the midst of current challenges.”

Prior to the gathering, a two-day empowerment program was conducted in April in South Kalimantan province where many youths still lack faith education.

"They discussed their situation and expectations from the Church. Then we formulated a number of programs,” said Franciscan Father Desideramus Ansbi Baum from St. Vincent de Paul Parish in Batulicin sub-district.

They included the recruitment of youths to teach Sunday school in areas served by Banjarmasin Diocese and money management among youths.

“When they ask for help from the Church, we require them to have bank accounts,” he said. However, not all these efforts by the Franciscans are easy to implement.

"The challenge is how to provide a pattern of accompaniment which really addresses the situation youths find themselves in," Father Peruhe said. "Our struggle is to find the right formula in order to involve more youths."

He said current developments like digital technology pose new challenges to empowerment programs as these lead to individualism and negligence among young people.

“We work together with Franciscan priests to attract as many youths as possible,” said Aegidius Halim, who heads the community of Catholic youths in St. Paschal Parish in Cempaka Putih sub-district in Central Jakarta.