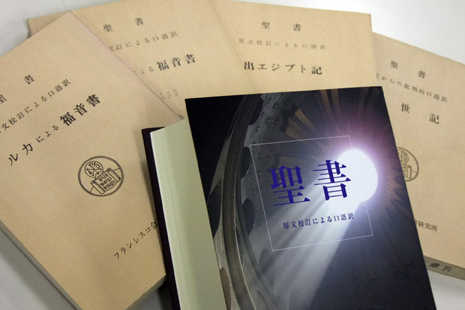 The publication of a one-volume translation of the complete Bible into colloquial Japanese recently has marked the end of a 55-year effort. The translation and notes were the work of Studium Biblicum Franciscanum (Franciscan Biblical School), whose Tokyo branch was founded in 1956. At a Mass in Tokyo Cathedral last week, members of the Franciscans and Paulists presented a copy of the new Bible to Cardinal Raffaele Farina, S.D.B., head of the Vatican Library. Although there were Catholic translations of the New Testament in both literary and colloquial translations in Japan in the 1950s, both used the Latin Vulgate as their basis. The new translation is the first Catholic Bible to be translated into Japanese from the original languages. Studium Biblicum Franciscanum published the translation and notes of Genesis as the first fruit of its labor in 1958. The complete New Testament was published in 1979. The last separate volume, Jeremiah, was published in September, 2002. After that, work began on preparing a single-volume version. Besides working on their own translation, the Studium staff cooperated in the production of an ecumenical translation of the Bible sponsored by the Japan Bible Society in the 1970s and the 80s. Franciscans in the United States provided funding for the half-century effort. Father Bernardin Schneider, 93, originally from Louisville, Kentucky, has served in Japan since 1950 and was involved with the work from the beginning.