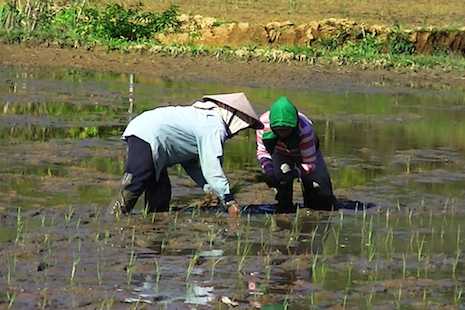 For decades Margareta Uwung was unaware of the hazardous effects of using chemical fertilizer and pesticides on her crops and health. But that changed after she joined the Franciscans' organic agriculture program 15 years ago.

Her family and many traditional farmers in Pagal, a village in Manggarai district on Flores Island, relied on fertilizers and pesticides for greater yields from their rice fields and vegetable farms.

"Since organic agriculture was introduced by the Franciscans in 2000, my eyes were open. I soon realized that we were completely off track," says Uwung, a mother of four.

Uwung is one among hundreds of fortunate farmers trained by the Franciscans on how to create fertilizer from organic material, like leaves, straw, animal waste, sawdust powder, and husk.

"I am lucky; I learned the best practice in growing vegetables, chilies, tomatoes, onions, ginger and potatoes, without using chemicals at all, but with homemade compost," she said.

Uwung and members of a farmer's group called Ca Nai, or One Heart, have learned the skills necessary to produce organic fertilizer, vegetables, ginger and other products, and sell them to other people.

"We want more people to join us in this noble work. But many still prefer to use chemical fertilizers," she said. "I am lucky; I learned the best practice in growing vegetables, chilies, tomatoes, onions, ginger and potatoes, without using chemicals at all, but with homemade compost," says Margareta Uwung, a farmer on the Indonesian island of Flores. (Photo by Siktus Harson)

"Our farmers are so dependent on chemical fertilizer that it jeopardizes the ecosystem. In the long run, the soil becomes infertile," said Marung, who offered praise for the Franciscans' organic agriculture campaign. Marung said he believes organic farming is an effective way to restore the integrity of soil damaged by chemical fertilizers introduced to farmers in the 1970s.

The government and the church have partnered in the organic farming campaign, much more now that the farmers are facing the negative effects of climate change — such as prolonged drought and a lack of water, he said.

Franciscan Father Thobias Harman, executive director of the eco-pastoral center in Pagal, says the Franciscan campaign has gained wider support from local government and church leaders, with church and civic workers banding together in support of an organic farming system that benefits the people.

'Rice fields are not fertile anymore'

Ruteng Diocese covers three districts — Manggarai, West Manggarai, East Manggarai — with a total Catholic population of more than 750,000, of which more than 80 percent are farmers. The Franciscan eco-pastoral center focuses on training farmers, church workers and activists in these three districts.

"The utmost reason for our existence is to empower farmers who have always been the loser in market competition. Our solution is to train them with the goal to improve their bargaining power, to help them produce competitive products," Father Harman says.

The eco-pastoral center was founded by Franciscan Father Mikael Peruhe in 1999 — initially as a response to the 1997-98 economic crises that befell many Asian nations, including Indonesia. Prices of basic commodities were skyrocketing, and at the same time agricultural lands were less productive as a result of decades of chemical fertilizer and pesticide use.

"Here, rice fields are not fertile anymore. They can produce, but the yields are below expectations. Farmers have spent much money on chemical fertilizers and pesticides but they harvest less," Father Harman says.

Uwung, the farmer, says that since she started using organic methods, her crops have produced a better yield of higher quality.

She recalled that after one particular harvest, her One Heart group filled two sacks of rice — one farmed through organic methods, the other using pesticides. The sack containing the rice that used pesticides weighed 100 kilograms while the organic rice weighed 160 kilograms.

An alternative to mining

Father Harman said that eco-awareness should have a lasting impact, and it must be reinforced through education. In the past several years, the center — in cooperation with the local government, church leaders, and educators — has developed an organic agriculture course to be taught in schools, with church- and state-run schools throughout the district offering the course.

"Since farming is part of the daily life of students, they must learn how to make the best of it," says Damianus Don, deputy principal of Cibal Public High School in Pagal.

"The eco-pastoral initiative is helpful because most students at our schools are sons and daughters of farmers. They can learn basic practices in farming from their parents, but also from their school teachers," he says.

"This is also a means to motivate students to see farmers as a respected profession. We make them aware that being a farmer is a noble job," says Father Harman.

Campaigns on organic agriculture are echoed throughout parishes, religious organizations and nongovernmental organizations in order to make a bigger impact, particularly in areas where mining has devastated many customary lands throughout West Flores.

"We want to assure people that agriculture is something that people can rely on, not mining," he said.

However, the biggest obstacle in implementing organic agriculture is the "instant mindset" on the part of farmers. Many farmers easily turn to chemicals to boost land productivity.

"They want good results with less labor. So they grab chemical fertilizer, ignoring the potential long-term disaster it can cause to their farms," Father Harman says.