The controversial, expensive rerun of the July 2017 election has provoked violence that inspired a church-backed peace march 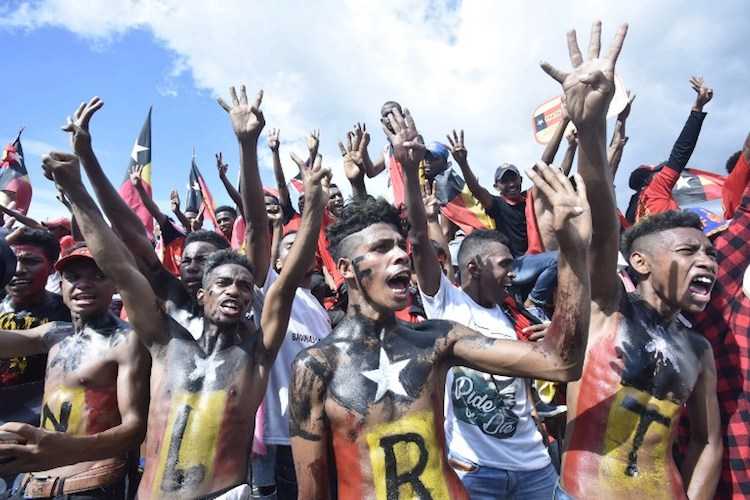 East Timorese people attend a Fretilin rally in Dili on May 9. East Timor is set to hold an election after a campaign marred by violence and political mudslinging as the impoverished country struggles to buoy its oil-dependent economy. (Photo by Valentino Dariell De Sousa/AFP)

A tense and occasionally violent 28-day general election campaign in deeply Catholic Timor-Leste has closed with the nation's politicians and voters taking a two-day breather ahead of the May 12 poll.

At least two bouts of violence have marred the campaign. They involved Fretilin supporters throwing rocks at opposition coalition AMP politicians in Viqueque and Baucau. In the latter incident, a 3-year-old child was hospitalized.

"We have identified the suspects but have not arrested them yet because we are waiting for the arrest warrant," said a police spokesman.

Following the violence, the Catholic Church and President Francisco Guterres organized a peace march on May 10 which saw thousands, including dozens of priests and nuns, parade through the streets to attend a folk music concert.

The march, organized by the Justice and Peace Commission of Dili Diocese, included Muslims and Protestants and representatives from the dioceses of Baucau and Maliana.

Father Joao Soares, who heads the commission, said participants walked around the city to the Marian Shrine.

They prayed the Rosary and sang spiritual songs to remind the public, particularly the political elites, to uphold the value of peace as taught by the Catholic Church.

"No matter how great leaders are, they must be able to show it through a commitment to peace," Father Soares told ucanews.com on May 10, adding that their commitment is much needed at this crucial time.

"This is the task of the church to work hand in hand with other social elements to build peace ahead of the election."

He said the church had proved to be committed to peace during the 24 years of Indonesian occupation, led by Nobel laureate Bishop Carlos Filipe Ximenes Belo, whose example continues.

The tiny nation's second general election in just 10 months was called amid great controversy by President Gutteres in March in an effort to break six months of deadlock which had seen the minority government of Prime Minister Mari Alkatari fail to garner enough votes to pass any legislation, including the crucial parliamentary program and 2018 budget.

Fretilin is now pitched against a united opposition known as the AMP, led by former president and PM Xanana Gusmao and his CNRT (National Congress for Timorese Reconstruction).

Fretilin and the CNRT went neck and neck to secure a combined 59 percent of votes in the 2017 election.

Former president Tuar Matan Ruak's People's Liberation Party, which ran an anti-corruption campaign calling for more spending on areas like health and education, got around 10 percent of the vote.

With no credible polling, observers have been reticent to make predictions except to note that the election is expected to be close and tense.