Muslims, Hindus, Christians and Buddhists are laid to rest side by side in the country's only interfaith cemetery

Christians light candles at the interfaith cemetery in Masdair of Bangladesh's Narayanganj district on All Souls’ Day on Nov. 2. (Photo courtesy of Pintoo Purification)

In an industrial hub on the banks of the River Shitalakshya, about 30 kilometers from Bangladesh’s capital Dhaka, stands a cemetery on about 8,100 square meters of land.

It is the only cemetery in this Muslim-majority country where followers of four major religions — Muslims, Hindus, Christians and Buddhists — have been buried for decades.

Administered by Narayanganj City Corporation since 1972, the history of this unique final resting place in the Masdair area of Narayanganj district is largely undocumented. Local sources say it developed as a Hindu cremation site during the British colonial era before it slowly developed into a melting pot for other faiths.

Holy Cross Father Elias Hembrom, the parish priest, noted that the interfaith cemetery has played a unique role in sustaining harmony among religions for years. 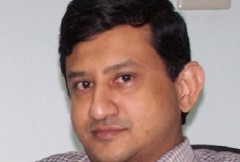 All Souls Day for all faiths is a day to remember

Sharing a common space for loved ones in Dhaka