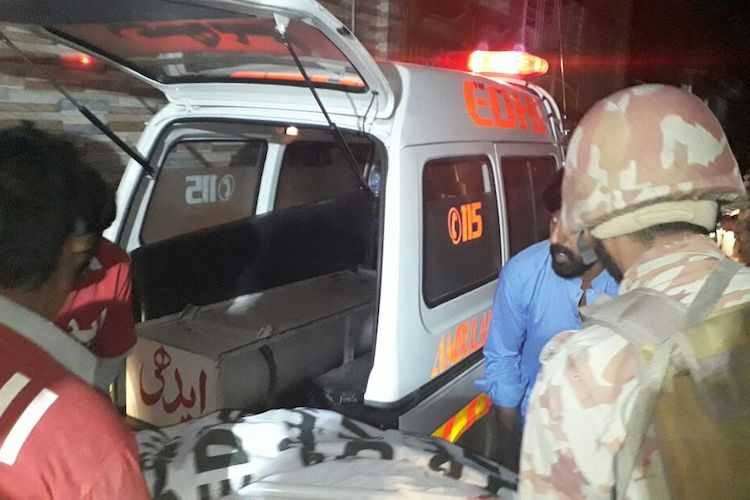 Rescuers and security personnel take the bodies of the four victims to Civil Hospital, Quetta, on April 2. (Photo by Naseem James)

Four members of a Catholic family were killed in a militant attack in southern Pakistan a day after the minority community celebrated Easter.

The deadly gun attack took place on April 2 in the Shah Zaman area of Quetta, the capital of restive Balochistan province.

The so-called Islamic State claimed responsibility for the attack in a statement carried by its Aamaq news agency.

"Four Christian relatives were going to a nearby market on an auto-rickshaw when two unknown gunmen on a motorbike opened fire on them," police officer Moazzam Jah Ansari told ucanews.com. "It was a targeted attack and an act of terrorism."

Police said the casings of 9mm bullets were recovered from the crime scene.

Pervaiz Masih, Tariq Masih, Imran Masih and Firdous Bibi died in the attack while a 10-year-old girl was injured.

A neighbor, Aftab, told ucanews.com that Pervaiz Masih, a rickshaw driver, was taking his relatives to an ice cream shop when they were targeted just outside their home.

"Pervaiz Masih had been living in Quetta for 10 years. His relatives came from Lahore and Dubai for the first time to celebrate Easter with him on March 29," Aftab said.

"They came back from a dinner and were going out to eat ice cream in a nearby market when gunmen sprayed bullets at them. The bodies are being sent back to Lahore for burial."

Aftab said the whole community was in a state of shock.

A day earlier, Gul Hussain, a member of the minority Shia Hazara community, was gunned down in Quetta. A sit-in is being staged by the community to demand action against the perpetrators.

In October last year, a hand grenade was thrown at a Pentecostal church in the same area.

A week before last Christmas, two suicide bombers stormed a packed Christian church in Quetta, killing at least nine people and wounding up to 56. Islamic State claimed responsibility for the carnage.