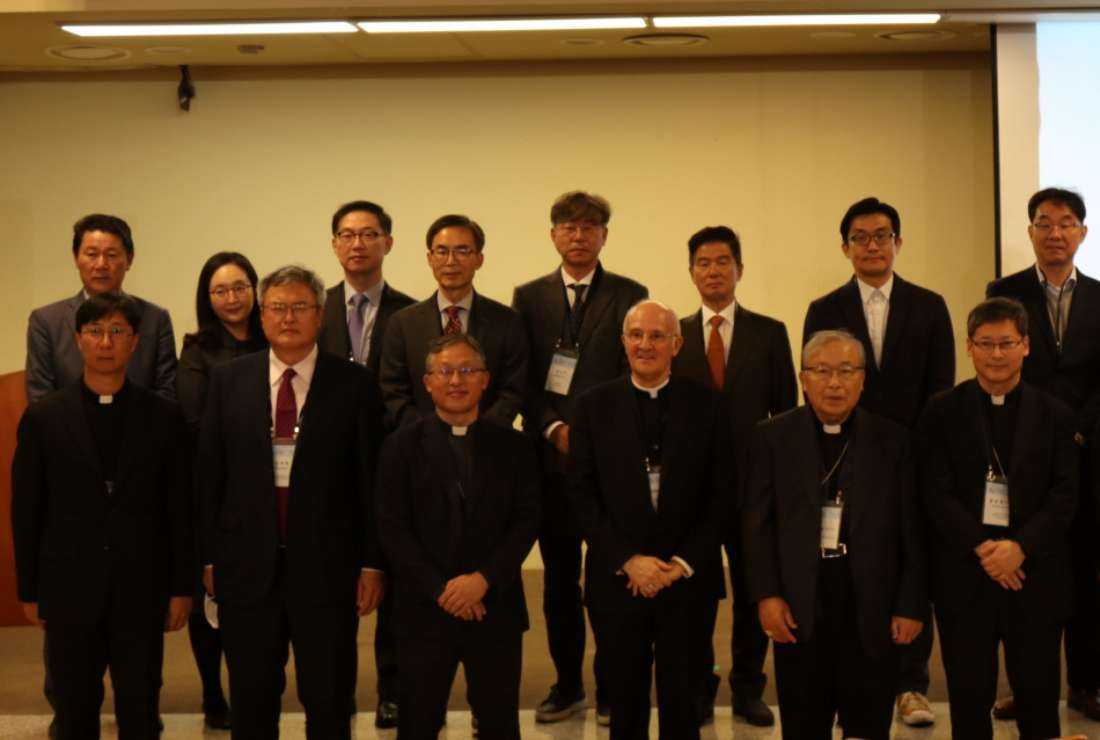 The participants of the Korean Peninsula Peace-Sharing Forum 2022 held at Catholic University of Korea on Nov. 26. (Photo: Seoul Archdiocese)

About 100 religious leaders, diplomats, clergy, activists, and laypeople joined an annual gathering in the South Korean capital Seoul to reiterate their commitment and efforts for peace and reconciliation on the Korean Peninsula.

The Korean Peninsula Peace-Sharing Forum 2022 at the Catholic University of Korea on Nov. 26 was organized by the Committee for Korean Reconciliation of the Archdiocese of Seoul.

This forum's theme this year was “Peace Awareness of the Catholic Church and Its Role for Reconciliation on the Korean Peninsula.”

Among the dignitaries present at the event were Cardinal Andrew Yeom Soo-jung, former archbishop of Seoul, Bishop Kim Ju-young, President of the Committee for the Reconciliation of the Korean People of the CBCK and Bishop of Chuncheon, Italian ambassador Federico Failla,  Maria Theresa Dizon-De-Vega, Ambassador of the Philippines.

The forum is viewed as an opportunity to look into peace awareness among the Catholics in Korea and seek ways for the Catholic Church and those with faith to work for true peace on the Korean Peninsula.

In particular, it was expected to become a platform of discussion among many experts to look for ways of love and solidarity for the reconciliation and unity between the two Koreas, according to a Seoul archdiocese press release.

Hong Yong-pyo, Director of the Institute for Peace Sharing and Professor of Hanyang University, said the Church has a greater role to play in establishing peace in the region.

“This year’s forum was prepared to compare peace awareness between the general public and Catholics, analyze how Catholic faith impacts peace awareness, based on which pastoral vision of the Catholic Church would be drawn,” he said.

Archbishop Peter Chung Soon-taick of Seoul and Apostolic Administrator of Pyongyang pointed out that the forum drew inspiration from Pope Francis who visited South Korea in 2014 and called for peace.

“The Korean Peninsula Peace-Sharing Forum is held every year and celebrates its 7th this year,” he said adding that it “started in commemoration of the visit of Pope Francis in August of 2014 and the Mass he celebrated in Myeongdong Cathedral in which he prayed for inter-Korean dialogue and recommended that more humanitarian assistance be provided for North Koreans.”

Archbishop Chung said he is “deeply regretful about the current situations on the Korean Peninsula” and emphasized that “genuine forgiveness, reconciliation, and self-reflection is needed more than any time in history.”

The prelate said that he seeks the attention of “experts of different religious positions as well as many Catholics at the forums,” and hoped that they “will be an opportunity to reaffirm the teaching of Pope Francis that no interest or political relationship should prohibit inter-religious dialogues and exchanges.”

“The Holy See does not fail to support Korea in its deepest aspirations, starting with the process of reconciliation and prosperity of the entire Korean Peninsula,” Archbishop Xuereb said.

The prelate said he is confident that the forum will become “an inspiring platform on which to explore concrete pathways for our common commitment to the noble ideals of peace-making and reconciliation on the Korean Peninsula and beyond.”

The Korean peninsula was split in two after Japan’s colonial rule ended at the end of World War II. The North was taken over by communists and the South retained democracy siding with Western powers.

The disagreements between the US and the Soviet Union failed to reunite the two Koreas, leading to the Korean War (1950-53) which resulted in an armistice ending hostilities.

A peace treaty was never signed, meaning the two Koreas are technically still at war.

Reunification, peace, and reconciliation in Korean Peninsula have been major pastoral priorities for Catholic Church in Korea for decades.