Forty years after massacre in El Salvador, search for justice goes on 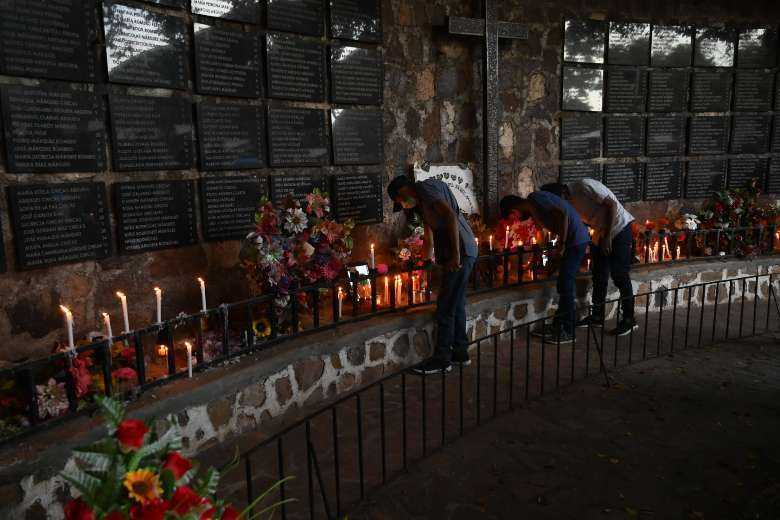 People participate in a candlelit procession that culminated with an offering of light to the victims of the El Mozote massacre during its 40th anniversary commemoration in El Mozote on Dec. 11. (Photo: AFP)

On the 40th anniversary of one of the worst massacres in Latin American history, the head of the US embassy in El Salvador said the diplomatic mission in the country has turned over all pertinent documents the US has on the case.

"Yesterday we delivered documents from our government requested by the court in charge of the case," tweeted Brendan O'Brien, chargé d'affaires of the US embassy in El Salvador on Dec. 11. "We support the rights of the victims of El Mozote and their surviving relatives to seek truth and justice."

To date, no one has been convicted of the killings of an estimated 800-1,200 Salvadoran civilians slaughtered by government forces in the village of El Mozote in a mountainous region of eastern El Salvador on Dec. 11-12 in 1981. But the latest attempt at justice has focused on seeking records, including documents in the custody of the Catholic Church, to pin down those responsible.

"Over the span of a few days, troops of the Salvadoran armed forces, many of them US-trained, massacred over 1,000 people. The overwhelming majority of them women and children," tweeted Massachusetts Congressman Jim McGovern Dec. 10.

"US involvement in El Salvador’s 12-year civil war, including during the time period when the massacre took place, obligates us to do what we can to seek justice," said McGovern. "As victims (and) their families continue to fight for justice, it is so important for their case to move forward."

The Catholic congressman long has worked on human rights issues and US involvement in El Salvador, including an investigation into the 1989 murders of six Jesuit priests, their housekeeper and her daughter.

The latest attempt for the victims of El Mozote has become paralyzed by a series of thwarted attempts in the search of records.

In September 2020, Spain convicted Inocente Orlando Montano, 78, a retired Salvadoran military officer, for the killings of five of the Jesuits, who were Spanish citizens, and sentenced him to more 133 years.

But that act of justice was an anomaly in human rights abuses in El Salvador. The killings in El Mozote, like other massacres in El Salvador, have largely gone unpunished, and the latest attempt for the victims of El Mozote has become paralyzed by a series of thwarted attempts in the search of records.

The judge hearing the El Mozote case recently was removed by a new Salvadoran law getting rid of magistrates or prosecutors 60 or older. Salvadoran President Nayib Bukele, who commands the armed forces, had promised he would do everything possible to open up the documentation the army has related to the massacre, but he later said the judge had no jurisdiction over the armed forces. No records were obtained.

During the Salvadoran civil war, the San Salvador Archdiocese opened a human rights office, which kept records of abuses and is believed to have accounts and other documentation of the 1981 killings.

Last January, San Salvador Archbishop José Escobar Alas also initially refused to allow the judge access to church records, saying that he was protecting victims. But after public outcry, the prelate granted access to the archive.

The archdiocese did not issue a statement on the anniversary of the massacre, but O'Brien and Salvadoran government officials visited the village Dec. 11.

O'Brien placed a wreath at a village monument that has the names and ages of some of the victims: Santos Argueta, 15; a child with the last names Vigil Marquez, 2; Catalino Rodriguez Guevara, 70; and children of just a few months.

The only known survivor, Rufina Amaya, died in 2007, but she told of how her husband was beheaded, of the rapes, the stabbings and shootings and burning of the homes of her fellow villagers during the two days they were under attack. Her four children, including an 8-month-old, were killed. She survived by hiding in foliage near her house.