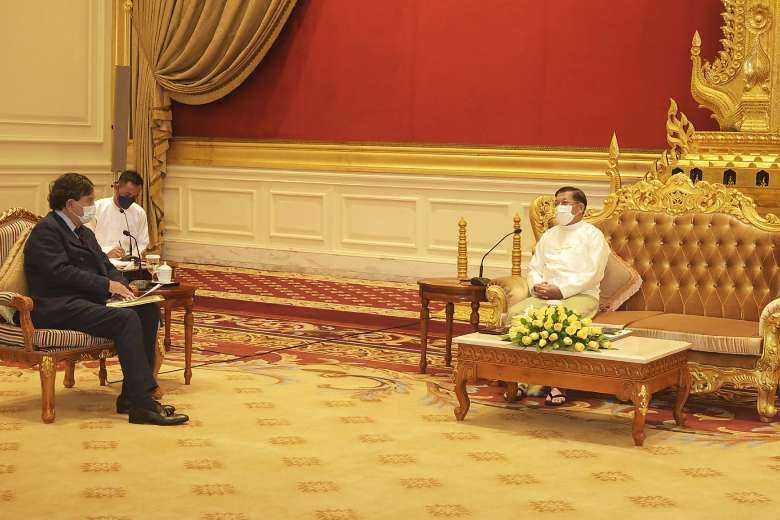 Bill Richardson, the former US diplomat turned global troubleshooter, believes Myanmar's junta is open to working with the world on humanitarian relief and possibly more after a rare visit that drew scrutiny.

Richardson, a former US ambassador to the United Nations and governor of New Mexico, appeared last week in a photo meeting military leader Min Aung Hlaing, who had just been snubbed at a summit of the ASEAN regional bloc.

In an interview with AFP, Richardson rejected rebukes by rights advocates and said that he hoped he made progress including in addressing the severe Covid-19 outbreak in the country formerly known as Burma.

"I'm optimistic. I'm hopeful that we made some mild progress that might lead to a better situation," Richardson said on his return to the United States.

"I sensed that they are open to more contact," Richardson said, while adding, "It's going to be difficult."

Richardson said he was invited by the foreign ministry to look at ways to bring in Covid-19 vaccines.

I've been criticized for a photo-op that I had with him, but I think it was worth it

He said that he suggested that Myanmar initially take in two million doses from Covax, the international alliance for developing countries, and that he gave specific recommendations on food delivery to hard-hit parts of the countryside.

Richardson said he was hopeful he had brokered a deal for a resumption of visits by the International Committee of the Red Cross to prisons -- which have been filled with political prisoners -- that have been suspended over Covid concerns.

He previously announced that he was able to bring out one prisoner, Aye Moe, who worked for his Richardson Center with a focus on women's empowerment.

Speaking of his meeting with General Min Aung Hlaing, Richardson said, "I've been criticized for a photo-op that I had with him, but I think it was worth it."

"If I got a prisoner out that was very important to me, if I made progress on humanitarian and vaccine issues and allowing prison visits by the Red Cross -- resuming them -- I think that's an easy give.

"I'm not a government. I don't legitimize governments. The people of Myanmar do, and governments do. I'm just one person that is trying to make a difference."

The military on Feb. 1 ousted the elected government, slamming the brakes on a fragile decade-long transition to democracy and arresting civilian leader Aung San Suu Kyi.

To the surprise of many diplomats, the Association of Southeast Asian Nations -- known for non-interference -- has recently taken a firm line against the coup, refusing to let the junta leader represent Myanmar at an October summit.

An ASEAN envoy last month canceled a visit to Myanmar after being told he would not be able to see anyone on trial, which includes Suu Kyi.

Richardson said he encouraged the junta to welcome envoys both from ASEAN and the United Nations.

"I think there's a little more daylight on the UN envoy because they know her," Richardson said.

"I thought that was progress. But they made no commitment, and that's something they have to work themselves."

Richardson said he did not bring up Danny Fenster, an American journalist hit by three criminal charges since the coup

She replaced Christine Schraner Burgener, who had been vociferous in her criticism of the junta and whose term was finishing.

Richardson said he did not bring up Danny Fenster, an American journalist hit by three criminal charges since the coup.

Richardson, declining further details, said the State Department asked him not to raise the case.

Price said Richardson was traveling as a private citizen but that if the trip "over the longer term does contribute to improve humanitarian access, that, of course, is in our interest."

Richardson, a former White House candidate from President Joe Biden's Democratic Party, has gone on missions including to North Korea and Venezuela in hopes of freeing prisoners and improving humanitarian conditions.