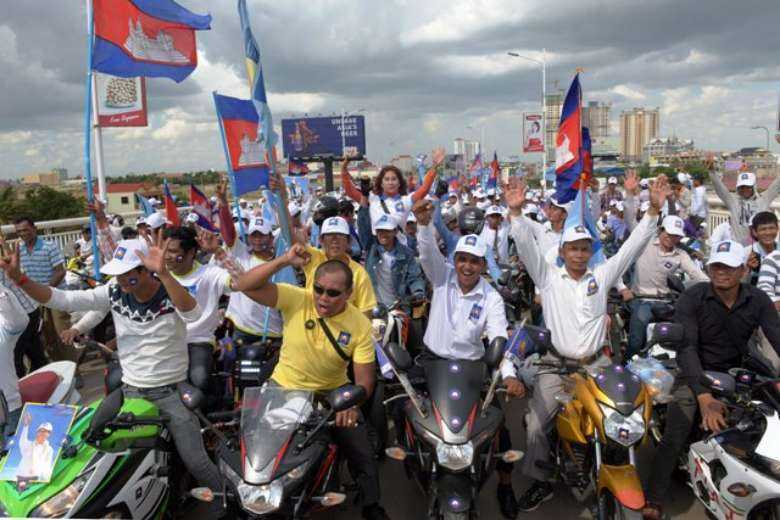 Supporters of the Cambodia National Rescue Party (CNRP) shout slogans in a rally on the last day of the commune election campaign in Phnom Penh on June 2, 2017. (Photo: AFP)

A Norwegian citizen and former supporter of the outlawed Cambodian National Rescue Party (CNRP) was arrested by authorities in Phnom Penh after he returned from exile ahead of Sunday’s commune elections.

Ear Channa, 41, was “accused of committing acts in the year 2020” that affected social security and public order and “particularly caused serious chaos to the national security,” the government-friendly Fresh News service said.

He was arrested on May 30 while applying for a passport in Phnom Penh and sent to detention in Prey Sar Prison.

In 2005, Ear Channa was granted asylum in Norway after criticizing government attempts to resolve a border dispute with Vietnam. He also backed the CNRP, which was dissolved by the courts in 2017, and is now supporting the opposition Candlelight Party.

Radio Free Asia (RFA) said he had returned to Cambodia last week to serve as vice-president of the Candlelight Party in Takeo province.

Candlelight Party vice-president Son Chhay told RFA that Ear Channa was the second person affiliated with his party to be arrested after voluntarily repatriating.

“This is not pressure against an opponent. It has nothing to do with the election. Don’t connect this case to the election campaign"

“Why are they making these kinds of arrests during the election campaign period?” he said. “This is all intimidation to disturb the election.”

However, Sok Ey San, spokesman for the long-ruling Cambodian People’s Party (CPP), said Ear Channa’s arrest and the election were not related. The arrest warrant was issued in 2020 and an election campaign cannot prevent the court from prosecuting criminals, he argued.

“This is not pressure against an opponent. It has nothing to do with the election. Don’t connect this case to the election campaign,” he said,

About 82,700 candidates from 17 political parties are contesting more than 11,600 council seats in 1,662 communes — local administration positions in this country’s third tier of government with each commune made up of three to 30 villages.

The Candlelight Party has emerged from the remnants of the CNRP and analysts say is the party to watch at this poll.

At the commune elections five years ago, the CPP won 50.76 percent of the overall vote while the CNRP scored 43.83 percent.

Tensions have been running high ahead of this poll as the courts continue to prosecute former CNRP supporters. About 150 Candlelight Party candidates were delisted after the National Election Commission ruled their application papers were incorrect.

Siam Phluk, a founder of the National Heart Party, was arrested for allegedly forging documents required to contest the polls and in March his party was delisted.

Sin Khon, a CNRP activist, was hacked to death in November.