Forced to leave the monkhood, Saharat Sukkhamla is alleged to have violated the draconian lese majeste law 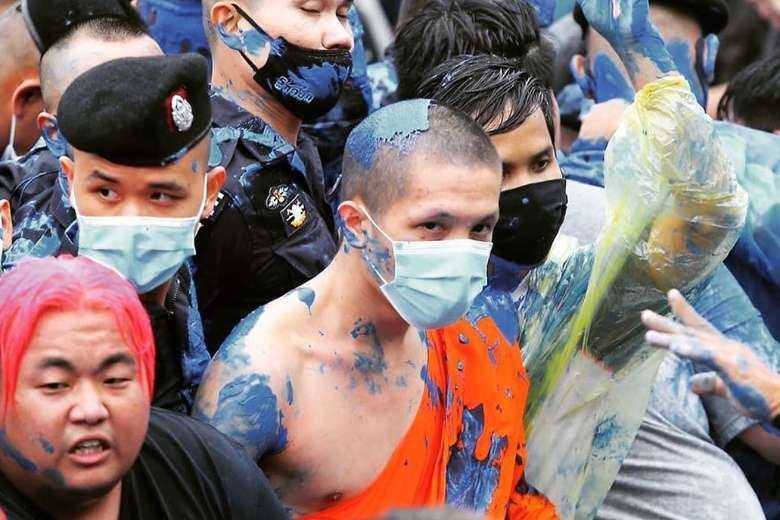 Saharat Sukkhamla attends a protest as a novice monk in October 2020. (Photo: Prachatai)

Thai authorities have charged a former Buddhist monk with royal defamation in an ongoing crackdown on pro-democracy activists that has seen the number of indictments continue to grow.

Saharat Sukkhamla, a 21-year-old man who was a novice monk when he gave a speech at a pro-democracy rally in November 2020, has been charged after a complaint made to police by a royalist who claimed the then monk’s speech violated the country’s draconian lese majeste law.

In Thailand, where any criticism of the royal family is punishable with up to 15 years in prison per indictment, anyone can file a royal defamation charge and police are bound by law to investigate all complaints.

Since November 2020, some 170 Thais, including several high school students, have been charged with royal defamation, according to Thai Lawyers for Human Rights.

In the latest indictment, Saharat, who is now a student at Mahidol University’s College of Religious Studies, is accused by prosecutors of making a statement about King Maha Vajiralongkorn that could be deemed an insult to the monarchy, which could cause a loss of respect for the institution.

Some Buddhist monks were permanent features of student-led pro-democracy rallies that erupted in the summer of 2020 with the aim of bringing down the government of Prayut Chan-o-cha, a former army chief who seized power in a coup in 2014 in the wake of street demonstrations against the then government by a royalist group that called for the suspension of electoral democracy.

Saharat left the monkhood last November, saying he had been facing pressure from the Sangha Supreme Council of Thailand, the country’s highest clerical authority.

The young monk was also accused of insulting the Supreme Patriarch of Thailand (the head of the order of Thai Buddhist monks) and causing discord among his fellow monks.

In a report published last month, Thai Lawyers for Human Rights detailed thousands of indictments handed down to pro-democracy activists on a variety of charges including sedition and royal defamation.

“At least 1,751 people in 985 cases have faced lawsuits for their political participation and expression since the [first] ‘Free Youth’ rally on 18 July 2020 until the end of December 2021. Among the people prosecuted, 272 concern minors under 18 years old,” the rights group said.

International rights groups have been calling on Thai authorities to desist from violating the rights of young activists by charging them with various crimes such as royal defamation.

However, despite such calls there has been no let-up in the rate of prosecutions.