Share this article :
Indonesia is mourning the death of a prominent Catholic figure and former finance minister who laid down the country’s financial principles during the rule of former strongman president Suharto Johannes Baptista Sumarlin died on Feb. 6 at age 87 in Jakarta. His daughter Sylvia Sumarlin said her father had a history of diabetes and recently suffered a stroke, complications from which led to his death. Sumarlin held several important economic posts in the Indonesian government until the late 1990s. They included stints as chairman of the Supreme Audit Agency, finance minister, chairman of the National Planning Agency and minister for administrative and bureaucratic reform. As finance minister (1988-93), he became known for his "Sumarlin Breakthrough" — a monetary, finance and banking deregulation policy that helped the country curb inflation and achieve sustained economic growth.
Related News 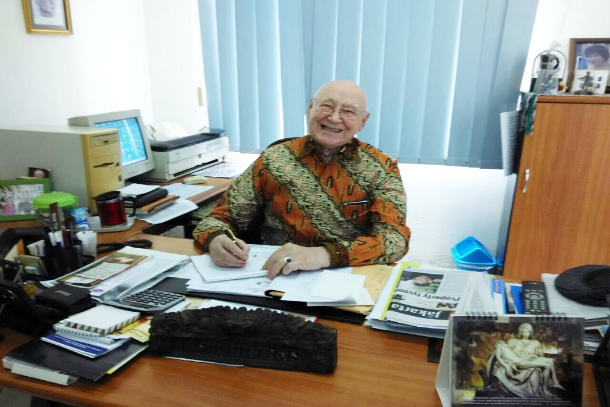 The current finance minister, Sri Mulyani, said Sumarlin was her lecturer when she studied at the University of Indonesia. “He was a very committed teacher. He continued to teach despite being a very busy state official,” she said. Sumarlin was a devout Catholic and regularly involved in church activities, both in his St. Francis of Assisi Parish in Tebet, South Jakarta, and Jakarta Archdiocese. "He was actively involved in community activities such as prayers and Bible sharing,” said Franciscan Father Hironimus Dey Rupa, lecturer at the Driyarkara School of Philosophy in Jakarta. "He was truly a man of faith who integrated his faith in daily life. He was intelligent but remained a very humble person.” Sumarlin was also active in supporting Jakarta Archdiocese’s school program called Ayo Sekolah Ayo Kuliah (Let’s attend school, let’s attend university) and known as ASAK. Through the program Catholics are encouraged to make regular donations to a parish fund that is invested in helping poor youngsters get a decent education.  Sumarlin, who will be buried on Feb. 10, was an advisory board member of the ASAK program in his parish.