Damaging effects of fundamentalism seen across the region 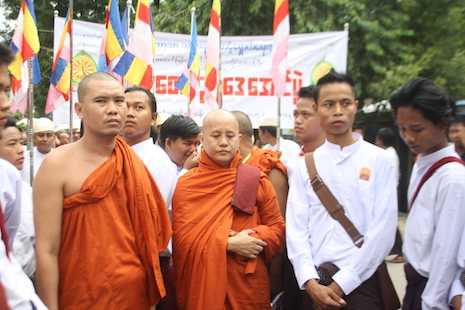 Ashin Wirathu, an influential hard-line monk from Myanmar's Ma Ba Tha movement, is seen during a rally supporting the legislation of race and religion laws in Mandalay on Sept 21. (Photo by John Zaw)

Buddhist fundamentalism, sometimes with deadly results, is on the rise in three Asian countries — Myanmar, Sri Lanka and Thailand — where Theravada Buddhism is the main branch of the religion and monks have been behind growing hard-line pressure.

Hard-line Buddhism has emerged in ethnically and religiously diverse Myanmar. Ironically, this has taken place under newfound freedoms of speech and expression, which have blossomed in the country since its generals swapped their military uniforms for the business attire of white shirts and traditional longyis after a reform process that began in 2010.

Across the Buddhist-majority country, long-standing anti-Muslim sentiment has also triggered conflict, particularly in the western state of Rakhine. Violence in 2012 left more than 200 people dead and forced tens of thousands — mostly Rohingya Muslims — to flee their homes. An estimated 150,000 people in the state have been trapped in temporary camps for displaced people, stripped of their rights to vote or even leave the camps.

Subsequently, anti-Muslim sentiment, mainly fomented by the radical movement known as Ma Ba Tha, which claims half of Myanmar's 400,000 monks as adherents, spread across the country with violence erupting in Meikhtila, in the center, to Lashio in northern Shan State near China, as well as the nation's second-largest city, Mandalay.

Ma Ba Tha, or the Committee for the Protection of Race and Religion, leveraged their newfound power to successfully lobby for restrictive race and religion laws — signed into law in August — aimed squarely at Muslims, even though followers of Islam make up just 4 percent of Myanmar's population. The laws, which have garnered widespread international criticism, include bills that impose mandatory birth spacing for women; marriage laws that require Buddhist women to register their marriages in advance if wedding a man who is not Buddhist; a law regulating religious conversions; and an anti-polygamy law that would punish people with more than one spouse.

U Parmaukkha, a senior member of Ma Ba Tha, welcomed a landslide victory by Myanmar's main opposition party, the National League for Democracy, in the country's Nov. 8 elections. He said he hoped party leader Aung San Suu Kyi would lead the country based on political will and nationalism, but nevertheless issued a warning.

"We hope that the NLD-led government will not abolish the race and religion laws that were imposed by President Thein Sein," Parmaukkha told ucanews.com, referring to Myanmar's current president, who will remain in his position until March 2016. "The laws are necessary to protect Buddhism."

The monk defended the controversial religion laws, claiming they are not aimed at oppressing minority religions, but protecting Buddhist women.

"I think that the NLD-led government will not prioritize abolishing the religion laws as there are many important issues to be tackled such as poverty, unemployment, health care and education," Parmaukkha said. "If the NLD did something against the religion laws, it is likely that the public would respond to it."

The monk raised strong concerns that other regional countries like Bangladesh, Pakistan, Malaysia and Indonesia had become Muslim-dominated — albeit in past centuries. This is the central excuse used by Ma Ba Tha to justify its words and actions. Muslims, meanwhile, represent 4 percent of the population in Myanmar, 9.67 percent in Sri Lanka and 6 percent in Thailand.

The outspoken Cardinal Charles Maung Bo of Yangon has strongly condemned the religion laws and said that "peddlers of hatred" were threatening the compassionate teachings of Buddhism in Myanmar. 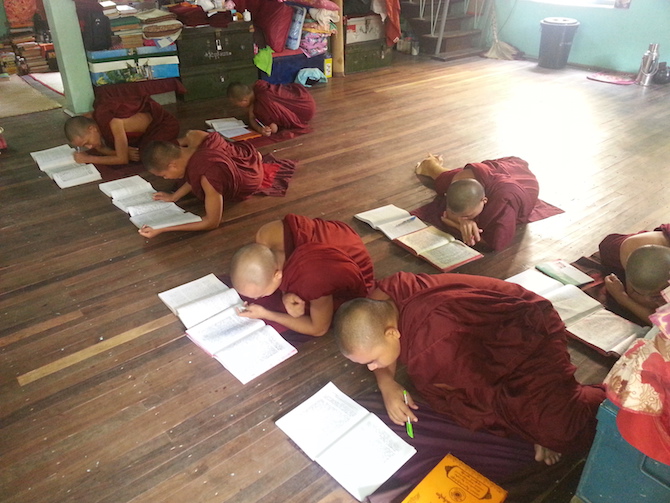 Young novices learn Buddhism taught by Ashin Wirathu in the compound of New Masoeyaing monastery in Mandalay in May 2015. (Photo by John Zaw)

In Thailand, conflict between Malay Muslim insurgents and local Buddhist residents, which reignited along the Malaysian border in 2004 and in which more than 5,000 people have died, has also helped the rise of Buddhist hard-liners in the "land of smiles."

Pornchai Pinyapong, president of the Bangkok-based World Fellowship of Buddhist Youth, was one of dozens of Thais who attended a June conference in Myanmar to support Ma Ba Tha, highlighting growing links between hard-liners in all three nations.

In language redolent of the Myanmar group, he told AFP that both countries had "difficulties" with Islam that needed to be addressed to protect Buddhism.

"When we see Rakhine state in Myanmar, it's the same problem as the southern part of Thailand," he said in reference to the conflict in Thailand's deep south.

As in Myanmar, there are groups of monks in Thailand who have called for Buddhism to be instated as the state religion in both countries.

Rajapaksa, however, lost in a shock defeat during January presidential elections. This has given hope to some people in Sri Lanka.

"I don't think that this type of attack is now a threat to Sri Lanka. There have been fewer signs of religious extremism in Sri Lanka after the election of the new government," Karunaratne told ucannews.com

In a condolence message following the Nov. 13 terror attacks in Paris, Prime Minister Ranil Wickremesinghe said Sri Lanka unambiguously condemns terrorism in all its forms — a heartening change from his fundamentalist-backing predecessor.

"This kind of attack indicates the urgent need of a global mechanism to defeat terrorism and extremism," he said.

The problem for these counties is that as hard-liners appear to be gaining more political heft as they peddle their message of fear to the undereducated rural poor, their targets are Muslim minorities.

When fundamentalism causes people and communities to be sidelined, which we have seen to such a tragic extent in Myanmar, it creates fertile ground for the Islamic State group to recruit in order to carry out its plan to extend its murderous caliphate across the breadth of Asia.

Buddhist hard-liners should be careful that they do not reap for their countrymen what they have sown.

With reporting by John Zaw in Mandalay and Niranjani Roland in Colombo.