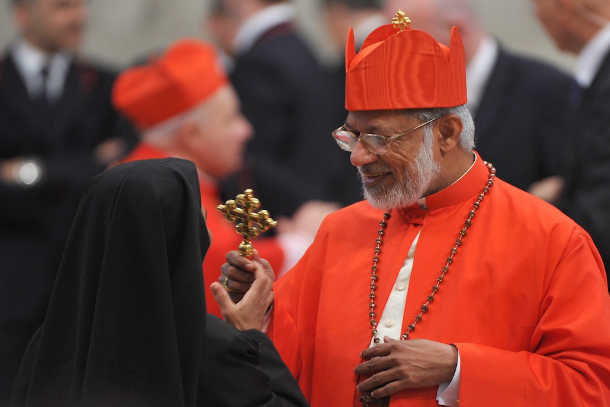 A nun kisses the cross of Cardinal George Alencherry at St. Peter's Basilica at the Vatican in Rome on Feb. 19, 2012. A 70-year-old Kerala priest has been accused of presenting a forged document before a bishops’ synod to defame Cardinal Alencherry, the head of the Syro-Malabar Church in India. (Photo by Alberto Pizzoli/AFP)

A financial controversy involving an Indian cardinal has turned murkier after police filed criminal charges against a 70-year-old priest accusing him of presenting a forged document before a bishops’ synod to tarnish the cardinal as corrupt.

Police in the southern state of Kerala have charged Father Paul Thelakat with forgery, using a forged document for cheating, and being part of a criminal gang for furtherance of a common interest.

“No police official has contacted me so far,” Father Thelakat told ucanews.com on March 19, maintaining that he knows “as much as you know” about the case from local media reports.

The Syro-Malabar Church, based in Kerala, has been embroiled in a financial controversy since November 2017 after a group of priests accused Cardinal George Alencherry and two priests of selling off land and incurring a loss of some US$10 million.

The Vatican last June removed the cardinal from administrative responsibilities of his Ernakulam-Angamaly Archdiocese, but he continues to be the major archbishop of the Syro-Malabar Church and heads its synod, based at the church’s headquarters in Ernakulam.

The latest police complaint filed on March 8 said Father Thelakat presented a forged bank document to the synod with an intention of presenting the cardinal as corrupt and to defame him.

The complainant, Father Joby Joseph Maprakavil, is a priest belonging to the Missionaries of St. Thomas congregation who heads the church’s internet mission at its headquarters.

As media began to discuss the issue, the church’s media commission chairman, Auxiliary Bishop Joseph Pamplany, issued an explanatory note on March 18 saying it was “misleading” to say the church’s headquarters had complained to police about Father Thelakat.

The note said the basis of the complaint was “a forged document” Father Thelakat gave to Bishop Jacob Manathodath, the new administrator of the archdiocese.

The document claimed that the cardinal transferred money from his personal bank account to two prominent establishments. Bishop Manathodath presented the document in the synod. It was found to be forged as the cardinal had no account at the bank mentioned in the document, the note said.

The synod then decided to move legally against those who created a forged document with the intention of defaming the cardinal, the note continued.

However, synod secretary Bishop Antony Kariyil told ucanews.com that he could not remember such a decision being taken in January. As secretary, he records synod decisions. “But I’m not sure if this issue was discussed there,” he said.

He also said he “does not know the legalities” of why the priest complained on behalf of the synod and bypassed him, the synod secretary.

Father Kuriakose Mundadan, secretary of the Presbyteral Council, a canonical body of archdiocesan priests, said it will discuss the synod moving against “a senior priest of our fraternity.”

He said that since the controversy began to emerge “several such documents” were within the priestly circle but secrecy was maintained because “we are not sure about their veracity.”

Not one but a set of documents

Father Mundadan said Father Thelakat, the former spokesman of the Syro-Malabar Church, gave “not one but a set of these papers in confidentiality” to Bishop Manathodath “requesting him to find out the truth about them.”

He said the Presbyteral Council was not aware of Father Thelakat’s move but “he acted for the good of the church in strict confidentiality. We know it’s not one document but a set of documents.”

When appointing Bishop Manathodath as administrator, the Vatican also mandated him to conduct an independent inquiry into all aspects of the allegations involving the cardinal.

“We have limitations in probing these documents but we wanted the truth to come out,” Father Mundadan said. It could be possible some forged documents were deliberately passed on to torpedo the efforts to get to the truth, he said.

“So, let the police investigate. We also would like to see who created the forged documents,” he said.

Father Thelakat confirmed that he did not attend the synod but “gave a set of documents to my superior in confidence … requesting him to find the truth about them. I wonder how it could be a crime.”

He refused to divulge the content or nature of the documents he handed over last December. “Will say nothing about it. If the intention was to go to media, I could have done it earlier,” he said. “The danger is this: if the police ask, I will have to give it all to them.”