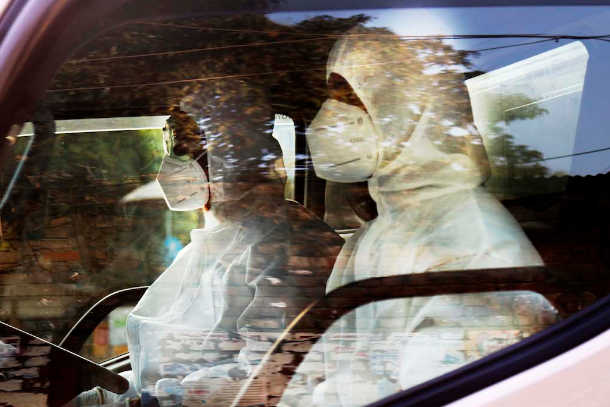 For weeks, an eerie silence has gripped Hazarat Shahjalal International Airport in Bangladeshi capital Dhaka as all operations have been suspended due to the Covid-19 pandemic.

In a video message on April 21, Robert Chatterton Dickson, Britain’s high commissioner to Bangladesh, said the commission would remain open in Dhaka, continue to offer support to UK nationals and assist those seeking repatriation.

The Brits are not the only ones leaving Bangladesh amid a surge in confirmed cases and deaths from the deadly virus. They are merely following European, North American and Asian countries in taking their citizens home.

A total of 919 United States nationals have left Bangladesh since the coronavirus outbreak and the latest flight on March 30 departed Dhaka with 328 US citizens, according to the US embassy in Dhaka.

Foreign Minister A.K. Abul Momen said repatriation of citizens is a common measure during emergency situations but admitted there might be “psychological fear” among foreign nationals living in Bangladesh.

“There remains a fear that they will not get the treatment they are used to getting in their own countries. Having said this, I can assure that we will try our best to provide healthcare to every foreign national,” the minister told Dhaka Tribune newspaper.

About 85,000 foreign nationals reside and work in Bangladesh, according to Pew Research Center data in 2018.

Despite an extremely high number of confirmed Covid-19 cases and deaths in Europe and North America, many foreigners have been keen to return home since Bangladesh recorded its first three Covid-19 cases on March 8

Bangladesh has recorded 3,772 confirmed coronavirus cases and 120 deaths, according to the latest data. About 30,000 people have been tested.

“Going back home is their personal choice. It is not unusual that people from developed countries don’t have faith in the healthcare system of an underdeveloped country. Maybe they are also going back to use some basic facilities their governments can offer,” Dr. Samir Kanti Sarkar, a director of the state-run Directorate General of Health Services (DGHS), told UCA News.

He claimed that the Covid-19 situation in Bangladesh was still relatively better than in many countries.

“The infection is relatively low but we have prepared ourselves. In Dhaka, eight hospitals are ready to treat coronavirus patients, and in all 64 districts at least one hospital with an isolation unit is being readied,” Sarkar said.

“Our healthcare sector has never been up to the mark to serve efficiently. The government and private organizations have prepared some hospitals haphazardly, but they are not enough. A deadly disease like Covid-19 poses great risks for an overcrowded nation,” Rozario told UCA News.

Lacking an effective health system and adequate medical equipment, doctors have been treating Covid-19 patients unprotected and some have become infected, he noted.

“A total of 170 doctors have tested positive for Covid-19, which is about 12 percent of infections, and including nurses it stands at 15 percent. If this continues, the whole health system will collapse soon,” Dr. Nirupam Das, chief coordinator of the Bangladesh Doctors Foundation, told UCA News.

Despite requests for high-quality personal protective equipment (PPE) as prescribed by the World Health Organization, most doctors in private hospitals are working without standard PPE, he said. Shocking death of a doctor

On April 15, Bangladesh was shocked to learn that a prominent doctor had died from Covid-19.

Dr. Moyeen Uddin, an assistant professor of medicine at MAG Osmani Medical College Hospital in Sylhet in the northeast, died at a Dhaka hospital. He had been in home quarantine since March 30 and tested positive for Covid-19 on April 5.

His family members claimed that the late doctor didn’t get sufficient support from his own institute and the DGHS.

His death triggered a social media backlash. Doctors and nurses started posting about the risks and challenges they have been facing in treating patients with Covid-19.

Basic health services in Bangladesh are largely inadequate to serve this overpopulated nation of more than 160 million.

Bangladesh has 93,358 registered doctors, according to data from medical and dental councils.

Though Christians make up less than less than half a percent of the population, they provide vital health services in about 21 percent of the country, according to Caritas health director Rozario, who is also the first vice-president of the Christian Medical Association of Bangladesh.

There are 13 Christian hospitals, about 100 healthcare centers, 170 doctors and more than 2,500 nurses in the country, he said.

“Our hospitals don’t have the capacity to serve Covid-19 patients, but they follow government guidelines. Patients showing symptoms of the disease are quickly referred to designated government labs and hospitals for testing and treatment,” Rozario added.

Doctors and medical staff are battling an unequal war in Bangladesh, said a medical officer based in a state-run hospital in Rajshahi district in the north.

“Our country had enough time to prepare for the Covid-19 outbreak, but nothing was done. The crisis is upon us and we are perplexed about what to do. Here we have only a few single-use PPE and no testing kits. We are extremely frightened, but we continue to work,” he said.