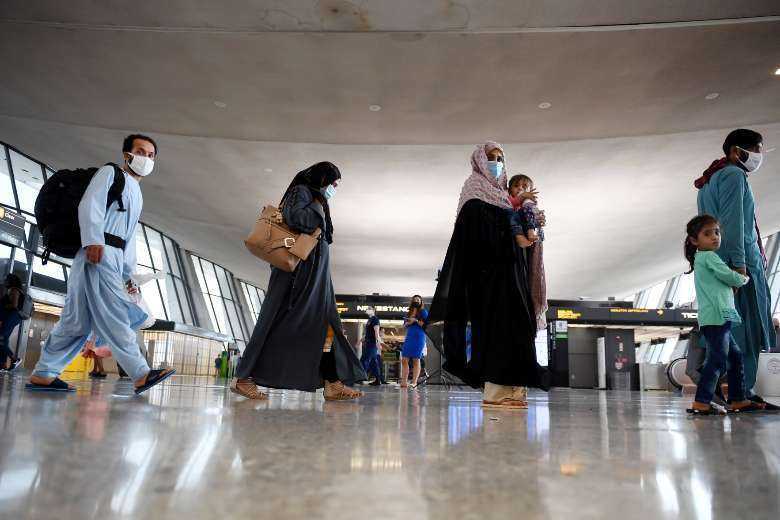 Afghan refugees arrive at Dulles International Airport on Aug. 27 in Virginia, United States, after being evacuated from Kabul following the Taliban takeover of Afghanistan. (Photo: AFP)

Evacuated in August as the Taliban regained control of Afghanistan, the head of the now-interrupted Catholic mission said this is a time of "advent," waiting for God to reveal how the Church can be present in the country again.

"We are now putting our mission back in God's hands," Barnabite Father Giovanni Scalese told the Vatican newspaper on Oct. 12.

"We are living a 'time of advent,' waiting, God willing, that there may be a new page to turn in this missionary adventure that has lasted almost a century," he told L'Osservatore Romano.

Father Scalese, 66, was among thousands of foreigners who had to flee the country in the run-up to the full withdrawal of US forces in August. The Italian priest landed in Rome on Aug. 25 along with five Missionaries of Charity nuns and 14 orphaned and disabled children and young adults in their care.

The sisters' center had to close as did the sole parish in Afghanistan, the Chapel of Our Lady of Divine Providence, located at the Italian embassy, where the pontifical mission was housed.

As the international community looks for ways to offer humanitarian aid to Afghanistan, Father Scalese said it will remain critical for countries to retain or establish some kind of ties with the country's rulers.

Only through dialogue and cooperation can one assert non-negotiable values, such as respect for human rights

"I believe one must establish a relationship of respect, dialogue and collaboration, a relationship based on a healthy realism, certainly frank, but devoid of ideological prejudices and attitudes of presumed moral superiority," he said.

"Only through dialogue and cooperation can one assert non-negotiable values, such as respect for human rights. The wrong attitude, in my opinion, would be to ignore or, worse, demonize Afghanistan, seeing it as a 'rogue state' to punish with exclusion or economic sanctions by the international community."

Such actions only hurt the Afghan people, "who deserve all the best and a future of peace," the priest said.

The pontifical mission's work was limited to charitable and humanitarian activities, and the priest's spiritual and pastoral responsibilities were limited to foreigners.

"Unfortunately, the sensitive political-military situation did not allow me to get to know Afghanistan very well, which still remains in my heart no matter what. Even my relationships with the people there were practically limited to staff at the embassy," he said.

He said he was obviously disappointed that even this limited presence of the Church in Afghanistan had to be suspended, "also because it would be better if this were not contingent upon political change; the Church should have the possibility of carrying out her mission in a particular country irrespective of who is in the government."

The first 50 years of the Barnabites' presence in Afghanistan were "fairly peaceful," he said, because there was a certain amount of stability and freedom when the country was governed by a constitutional monarchy and Islam was the official state religion.

"Priests could travel without a problem and they were respected and esteemed. The Christian community was flourishing, many Masses in different languages were celebrated on Sundays" as well as the sacraments of baptism, communion and confirmation, he said.

Difficulties began when civil war erupted in 1978, followed by the Soviet invasion and occupation and so on, he said.

Despite the various conflicts and hardships, the Church was still able to keep its mission alive all that time, even during the years the Islamic resistance of the mujahedeen ruled and when the Taliban took control from 1996 to 2001.

Their work continued even when Barnabite Father Giuseppe Moretti had to return to Italy in 1994 after he was injured in a rocket attack against the Italian embassy.

"The only Christian presence in Kabul those years was made up of the Little Sisters of Jesus, consecrated women inspired by Charles de Foucauld, who unceasingly remained until 2017, and they were always respected, as was respected the church in the Italian embassy," he said.

He felt a bit frustrated, he said, for not having been able to do more the past seven years and for the termination of what little they had been able to do.

But he finds comfort in the conviction that God can act in every situation, "even amid apparent setbacks," and that "all those who entrust themselves to God in love will bear good fruit," even if that fruitfulness is often invisible, he said, highlighting passages from the apostolic exhortation Evangelii Gaudium.