Myanmar migrant workers prepare a fishing boat in the Thai coastal province of Samut Sakhon. Rights groups say that migrants are forced to work in slave-like conditions in the fishing sector, where boats often remain at sea for weeks at a time.(Photo: AFP)

Thailand has been downgraded by the United States in a global report on human trafficking because the Southeast Asian nation’s government “does not fully meet the minimum standards for the elimination of trafficking.”

In its 2021 Trafficking in Persons Report, in which Thailand has been downgraded from a Tier 2 country to a Tier 2 Watchlist nation, the US Department of State notes that despite having made some progress in eliminating human trafficking, Thai authorities last year “initiated significantly fewer trafficking investigations, prosecuted fewer suspects and convicted fewer traffickers than in 2019.”

The report’s authors highlight persistent allegations that migrant workers have been tricked or coerced into forced labor in many industries in Thailand, yet the country’s military-allied government continues to downplay the extent of the problem.

The downgrade came as a shock to the Thai government, which had been lobbying to have its status upgraded from Tier 2 to Tier 1.

“Thailand finds it disappointing that the report does not reflect fairly the significant efforts and concrete progress Thailand has made in combating human trafficking,” Thailand’s Ministry of Foreign Affairs said.

“The Royal Thai Government remains resolute in advancing efforts in prevention and suppression of human trafficking to safeguard human dignity in line with the human rights and humanitarian principles which Thailand has long cherished and upheld.

“Thailand stands ready to enhance cooperation with various partners in a constructive manner, both domestically and internationally, with a view to ultimately eradicating the scourge of human trafficking and forced labor in all forms.”

Labor and human rights advocates have long maintained that Thai authorities often turn a blind eye to forced labor in industries such as fishing and agriculture, which have been plagued by allegations of large-scale labor and rights abuses. 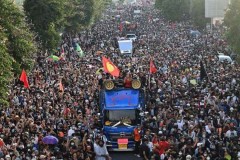 Over the years, numerous migrant workers from countries such as Myanmar and Cambodia have come forward to accuse their Thai employers of forcing them to work for as much as 16 or more hours a day in grueling conditions for little or no pay.

Its researcher found that once being tricked to work aboard fishing vessels, many migrant workers found themselves trapped, with boat owners, skippers and brokers forcing them to work against their will.

“They hold all the power and we can’t do anything,” Sinuon Sao, a Cambodian migrant working on a fishing vessel in waters off the eastern Thai province of Rayong, told the rights group.

Weak law enforcement continues to allow Thai brokers and boat owners to get away with exploitative practices, according to Human Rights Watch.