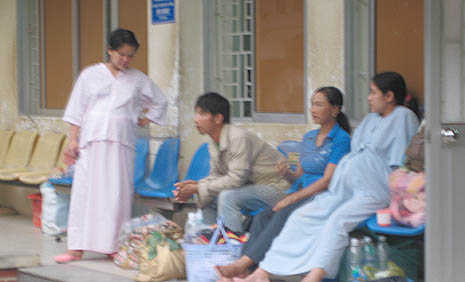 Pregnant women near giving birth at a hospital

Women forced to have abortions in a northern Vietnam province say they suffer physically and spiritually, and are doing charity work to erase their sins and ease their consciences. Anna Le Thi Thu lives in Yen Bai province, has two children and seems to have a happy marriage. However, she says her heart is filled with anguish. “I’m seriously tormented by four abortions I’ve had since I got married 15 years ago,” Thu said, adding she came close to dying after two of the terminations at local private clinics. “I had to terminate the pregnancies because village authorities told me I couldn’t have more than two children,” the 40-year-old explained. Vietnam has maintained a two-child policy since the late 1980s. Thu said she did not use contraception because she was afraid of committing a sin. I had used oral contraception earlier and so was barred from going to confession and receiving communion by the parish priest, she explained. “Now I deeply regret killing my children. I would rather have taken a pill or had a coil rather than the abortions,” Thu said. Teresa Pham Thi Thuy, another Catholic woman, admitted she has had three abortions. “Women who have undergone abortions endure terrible physical and spiritual suffering,” Thuy said. Most women cannot refuse them because of the government’s two-child policy. “Many have to use contraceptives to avoid unwanted pregnancies,” she added. She said families that have more than two children are made to suffer. The parents are severely reprimanded by village officials at village meetings. They pay much more for their children’s registration documents and are prevented from borrowing money from state-run banks. Others are fired from their jobs at state agencies. Thuy, who sells clothes, said Catholic women in her parish pray for their aborted fetuses and name them after saints such as Peter, John and Maria. They also sing in choirs and give material support to orphans and poor people, she added. One priest offering pastoral services to a parish in Yen Bai province said he allows women who use contraceptives or have abortions to go to confession and receive communion once a year as a way of consoling them during the Lent and Easter period. The priest who didn’t want to be named said most women still able to bear children are forced to use contraceptive or have abortions by the government. Yen Bai province has 45,000 Catholics. VT13499.1643