Socially progressive Taiwan became the first in the region to legalize same-sex unions on May 17, 2019 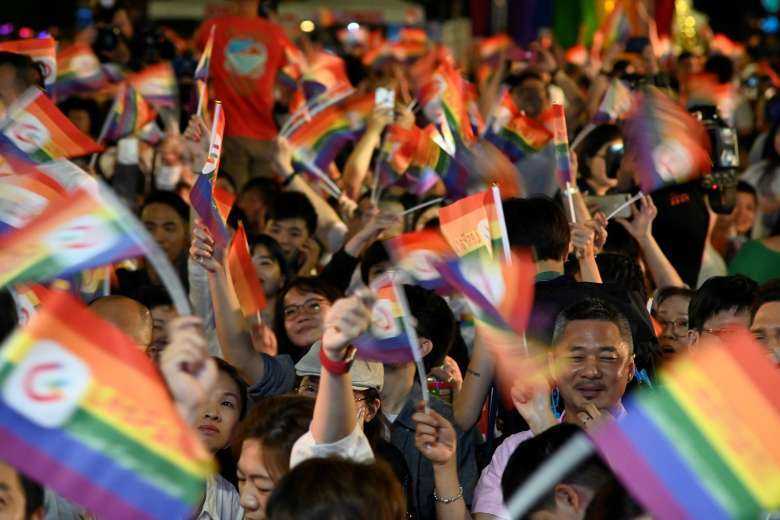 In this file photo taken on May 25, 2019, people wave rainbow flags during a mass wedding banquet for gay couples in front of the Presidential Palace in Taipei. (Photo: AFP)

Taiwan's LGBTQ community celebrated the third year of gay marriage being legal this week, but for Vincent Chuang it was a bittersweet reminder that he still cannot wed because he fell in love with a foreigner.

Socially progressive Taiwan is at the vanguard of Asia's gay rights movement, and became the first in the region to legalise same-sex unions on May 17, 2019.

But the law still contains restrictions that heterosexual couples do not face, including limits on which foreigners same-sex couples can wed.

Under the current rules, Taiwanese nationals can only marry those from the roughly 30 countries and territories where same-sex marriage is also legal.

Activists say that discriminates against most transnational couples and keeps them apart, especially during the pandemic, which has seen partners unable to cross borders and enter Taiwan as dependants or spouses.

For Chuang, a 36-year-old teacher, the enforced split from his Filipino partner Andrew Espera has been painful.

"We are just two persons who love each other and who want to be with each other. We are not asking for anything extravagant, only this small right," he told AFP.

Chuang met Espera, a cook, six years ago during a trip to the Philippines.

"He was a chef at the bed and breakfast place I was staying. It was love at first sight," he recalled.

The pandemic forced the couple into a video call relationship, with Espera teaching his partner Tagalog and cooking as they tried various ways to be reunited.

They almost gave up until Espera eventually secured a student visa and they were finally reunited this week. But both feel they have been denied a basic right given to heterosexuals.

"We are hoping and praying for this, (that) Taiwan can accept us, accept our relationship and allow us to be legalised partners even though my country is yet to legalise same-sex marriage," Espera, 31, told AFP.

The Taiwan Alliance to Promote Civil Partnership Rights says some 470 transnational same-sex couples currently wish to get married but are unable.

So far they have won three cases. But the rulings only apply to the couples in question, meaning anyone who wants to follow in their footsteps would need to launch the same time-consuming legal battle.

"But there is still an obvious missing piece that needs to be mended."

Government employee Lee Wei-cheng last saw his partner, a 33-year-old from Myanmar, when they joined a huge 2019 Pride march in Taiwan that drew a record crowd of 200,000 to celebrate gay marriage legalisation.

Since then, they have been kept separated by both the pandemic and last year's coup in Myanmar.

Every day Lee, 31, worries for the safety of his partner, who is ethnic Karen, amid ongoing fighting between a Karen armed group and junta troops.

"We hope to live together in Taiwan and we thought getting married would be the easiest way, but we are still unable to do it," he told AFP.

"We've been separated for three years and we feel so helpless. As Taiwanese, I should have the right to marry whom I want to marry, but I've been deprived of that right -- the freedom of marriage".

Malaysian Tan Bee Guat has been living in Taipei on a student visa for six years in order to be with her partner Lai Kai-li, but the couple laments that their future is forever in limbo without a legal marriage.

"I was happy and feeling hopeful when Taiwan legalised gay marriage because it's unthinkable in Malaysia, not even after 50 years," Tan said in an interview in their rented apartment.

The couple is struggling financially, having to mostly rely on 39-year-old Lai's income as an independent publisher, because Tan as a foreign student is only allowed to work a maximum of 20 hours a week.

But the campaign to secure full equal rights must continue, they argued.

"We are treated differently because of our sexual orientation," said Lai. "This is discrimination".