For Pakistani catechists, living the faith is a challenge 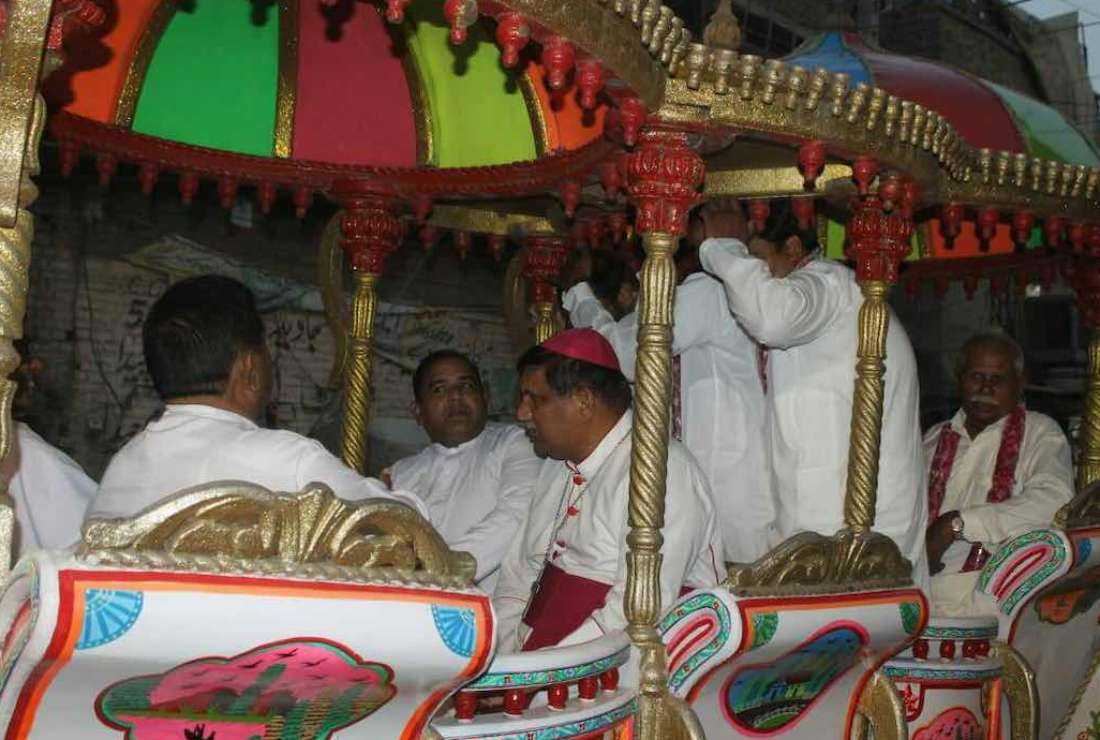 Bishop Indrias Rehmat (center) of Faisalabad with catechists during an award presentation ceremony at the Holy Rosary parish, in Faisalabad, Pakistan, on June 5. (Photo supplied)

Yousaf Bachan, a third-generation catechist from Faisalabad in Pakistan’s Punjab province, is known for being outspoken on his YouTube channel but doesn’t like to gripe about his financial woes.

He refuses to share the status of the pensions drawn by his father and grandfather.

“We don’t share data on money and tithe. Inflation has affected parishioners whose support has dwindled, but we don’t want to raise problems. Only publicize our work,” Bachan told UCA News.

Bachan, who is among more than 100 catechists serving in 25 parishes of Faisalabad diocese, gets 4,000 rupees (US$ 17.41) per month from the parish priest.

The diocese is observing 2022 as the "Year of Catechists" to mark the 70th anniversary of St. Albert’s Catechists Training Centre in Khushpur, the country’s biggest Catholic village.

So far, Faisalabad diocese has held four events to honor local catechists, about 20 of them retired now.

He also increased the pension of retired catechists to 1,000 rupees, for which Ghani Sardar, who graduated from St. Albert’s in 1970 and retired in 2003, thanked the prelate.

“We bear the cost of petrol and ride our motorcycles to reach the faithful in distant villages. It is really tough during winters due to the extreme cold and fog,” said the 80-year-old who has worked with 27 priests.

The Church should do more for catechists who play a crucial role in spreading the gospel, the way of Christ and teaching sacrament, said Sardar.

“All the 16 catechists of my batch drew a monthly salary of only 127 rupees. Nowadays it ranges from 1,500 to 2,000. It was difficult raising eight children but I belong to a family of farmers and owned my own house,” he explained,

Sardar is credited with popularizing the singing of hymns in the form of qawwali (Sufi devotional), which involves skillful repetition of a verse to the accompaniment of hand clapping and drum beats.

The bulk of evangelization in the Islamic republic is carried out by catechists like him who must complete 10 years of normal schooling before applying for training.

The Canada-based Catholic charity ‘Aid to the Church in Need’ (ACN), which has long supported the training of catechists, has called the St. Albert’s Centre in Khushpur “the beating heart” of the Church’s pastoral outreach in Pakistan.

There is a greater emphasis on formation rather than mere information and the tight academic schedule allows time for daily meditation, monthly days of reflection and retreats twice a year.

The catechists in training visit the local parishioners of Khushpur to talk and pray with them. They also accompany the fully trained catechists in their work for a week or so.

The catechists’ wives also take courses providing foundational knowledge of basic scripture to minister to the women in the communities, besides healthcare, needlework, etc. The children attend school for the duration of the course.

“The parishes here are often vast and with numerous outlying settlements, and consequently the catechists are indispensable supports for the priests playing a major role in passing on the Catholic faith. In many cases the life of the parishes would virtually come to a halt without them,” states the ACN website.

In Lahore archdiocese, a new catechist starts with a monthly salary of 3,000 rupees. The annual increment is only 100 rupees depending on the approval of superiors in the church.

In Faisalabad diocese, the catechist earns 2,000 rupees for officiating a marriage.

According to Father Abid Tanveer, vicar-general of Faisalabad diocese, the catechists are sometimes compensated with ration packages.

“They mostly generate salary from pastoral work and house visits. Jesus also advises that the laborer is worthy of his hire. Those married are even paid stipend during training and made fully aware of these circumstances,” he told UCA News.

Father Abid Tanveer said the catechists did play a vital role in building small Christian communities because of their familiarity with local people and grassroots realities.

“The bishop has notified increment in their salaries but the coronavirus pandemic has badly affected Church finances,” he added.