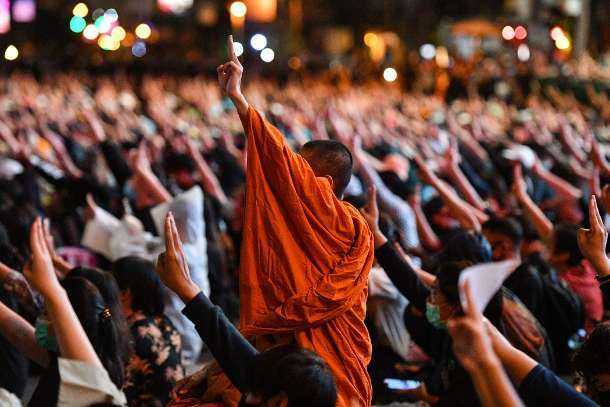 A Buddhist monk gives the three-finger salute with pro-democracy protesters during an anti-government rally at Asok in Bangkok on Oct 18, as they continue for the fourth consecutive day to defy an emergency decree banning gatherings. (Photo: Mladen Antonov/AFP)

Shortly before hundreds of police officers in full riot gear descended on thousands of students protesting peacefully against his government and started shooting jets of chemical-laced liquid from high-powered water cannons at them in downtown Bangkok on Oct. 16, Thai Prime Minister Prayut Chan-o-cha professed surprise that anyone would want to see him relinquish power.

“Let me ask you what I did wrong? What did I do wrong? I ask you,” Prayut asked in a fit of pique in response to a Thai reporter’s question about the young protesters’ demand that he resign.

It is hard to know if Thailand’s prime minister was feigning ignorance as there are plenty of reasons why Thais might think he has done wrong.

For starters, at the very same news conference, the former army chief appeared to issue a veiled threat of deadly violence against the protesters, many of whom were in their teens and early twenties.

“Don’t be careless,” Prayut said. “Don’t be reckless with your life. Prepare to die any moment by illness or whatever,” he elucidated in a musing sort of way. “Death may come today or another day. Everyone can die at any moment.”

As an ex-soldier, Prayut surely knows a thing or two about death and how to inflict it.

Prayut, then head of the Royal Thai Army, seized power in May 2014 by unseating a widely popular elected government in a coup. He has been in charge of Thailand ever since despite growing discontent with his military-led administration. He hung on to power last year following blatantly rigged parliamentary elections.

For well over six years, with the powerful army’s backing, Prayut’s government has stifled political dissent, routinely violated basic rights like free speech, and turned the clock back on people’s hopes for a democratic society with real rule of law.

Only last week police, presumably on his orders, arrested dozens of students and numerous leaders of youth-led pro-democracy protests. The young protesters are facing sedition charges and have reportedly been held without legal representation.

Even a Thai journalist was detained simply for reporting on the police crackdown on protesters on Oct. 16.

“Thai media are being targeted as part of the crackdown on the current round of protests,” a local online newspaper reported. Although the journalist was later released after paying a fine, his arrest was a warning to other journalists that they could be next.

Thai authorities can now arrest almost anyone at will at any politically themed rally after Prayut issued a “Severe State of Emergency” decree on Oct. 15, on top of an already existing emergency decree.

The new decree bans any gathering of more than five people and allows the authorities to censor news reports they deem “a threat to national security.” The Severe State of Emergency is expected to last for at least a month, but it could be extended indefinitely.

Yet, despite such draconian measures by a repressive and antidemocratic government, young Thais are pledging to carry on with their protests until Prayut resigns and their other demands for democratic reforms are met.

They have been mobilizing on social media for months and the latest violent crackdown seems to have served to stiffen their resolve.

To all intents and purposes, Prayut is fighting a losing battle as his administration, which has been mired in numerous allegations of graft over the years, appears to be deeply unpopular. His hardline stance has made it even less popular.

The Severe State of Emergency decree is “a vague [and] drastic order that will lead to more people being unfairly arrested, detained and prosecuted,” stresses Ming Yu Hah, a senior rights advocate at Amnesty International. “These moves are clearly designed to stamp out dissent, and sow fear in anyone who sympathizes with the protesters’ views.”

Rather than “ruling by decree and mass arrests, the Thai authorities must reverse course,” the rights advocate said.

Some of the harshest criticisms of the Thai prime minister’s heavy-handed tactics against protesting students, thousands of whom are still in high school, have come from his fellow Thais.

“PM Prayut Chan-o-cha’s unilateral declaration of a new emergency decree giving him absolute power without any oversight, and tonight’s attacks on unarmed protesters prove that he is unfit to rule,” Khaosod English, a Bangkok-based online newspaper, wrote in an editorial following the use of water cannon on the youngsters on Oct. 16.

“The new edict, as wielded by Prayut, proves to be an outright suspension of many rights protected by the constitution,” the editorial said. “It reveals Prayut’s attempt to set the clock backward and return Thailand to the dark period following his coup in May 2014, when he reveled in absolute authority that did not answer to any civilian institution.”

Once a dictator, always a dictator, the newspaper argued in calling for the ex-army chief to resign.

“If left unchecked, his ambitions will mean a collapse of any semblance of democratic rule and constitutional protection of basic freedoms Thailand has gained since the 2019 election,” Khaosod English said. “Gen. Prayut has lost any legitimacy he might have had left. He has to go, and he has to go now.”

It is hard to quibble with that assessment. For the sake of his nation and all its citizen, Thailand’s prime minister, who gained power undemocratically in a coup, would do his fellow Thais a big favor by giving up that power peacefully.