Ethnic villagers pay homage to Reverend Father Paolo Ciceri, who served in the country from 1963 to 2017 Indigenous Catholic villagers in northern Bangladesh have held a football tournament to honor an Italian missionary who played an outstanding role in their rehabilitation and livelihoods.

A total of 16 teams, each with five members, participated in the Reverend Father Paolo Ciceri Football Tournament that attracted hundreds of villagers as well as government officials and politicians.

Italian Father Ciceri, a member of the Pontifical Institute for Foreign Missions (PIME) congregation, was a missionary in Bangladesh from 1963 to 2017 before returning to Italy due to poor health.

The priest was mostly based in Rajshahi and is credited with creating housing, rehabilitation and livelihoods for thousands of poor and landless ethnic indigenous Catholics in the area.

Milon Biswas, 42, one of the organizers of the competition, said the event paid homage to Father Ciceri.

“Father Ciceri is the most revered man to us and we respect him as a father figure. He provided us shelter, food and gave us hope to do good things. So, we arranged this tournament to remember him,” Biswas, a Paharia Catholic, told UCA News.

The program was supported by local Catholics as well as individual donations and entry fees from participants.

Milon said that they would like to arrange the tournament every year and added that they have planned a host of initiatives to pay tribute to the priest. 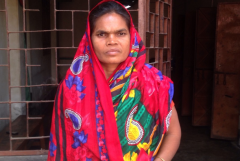 “We plan to arrange a Mass every year, publish a magazine, set up a social organization and start a museum in memory of Father Ciceri,” he added.

The organizers, however, didn’t invite a priest or any church representative from Rajshahi Diocese. It was largely due to an ongoing land dispute between local Catholics and church authorities.

While ethnic Catholics hold Father Ciceri in high regard for his contributions, church officials alleged the priest, despite working for the local Church, didn’t get permission from a higher authority while distributing land and constructing houses for people, leading to troubles and huge financial burdens in taxes for the Church today.

“We think local priests were not eligible for a program in the name of the great, religious and honorable priest like Father Ciceri, so we did not invite any priest,” Milon added.

A tournament participant, speaking on condition of anonymity, grieved that the local Church refused to acknowledge the great works of Father Ciceri.

“He was a great missionary and we will continue to honor him always. The church authority should remember priests like him with due respect for their contributions in Bangladesh,” he told UCA News.

Father Prodip Joseph Costa, parish priest of St. Peter’s Church, who has also been accused of leading an eviction drive against local Catholics, declined to comment on Father Ciceri’s works and said he was unaware of the tournament.

“I just came to know that villagers arranged a football tournament but did not know how it was arranged. No church body has been involved in this tournament,” Father Costa told UCA News.