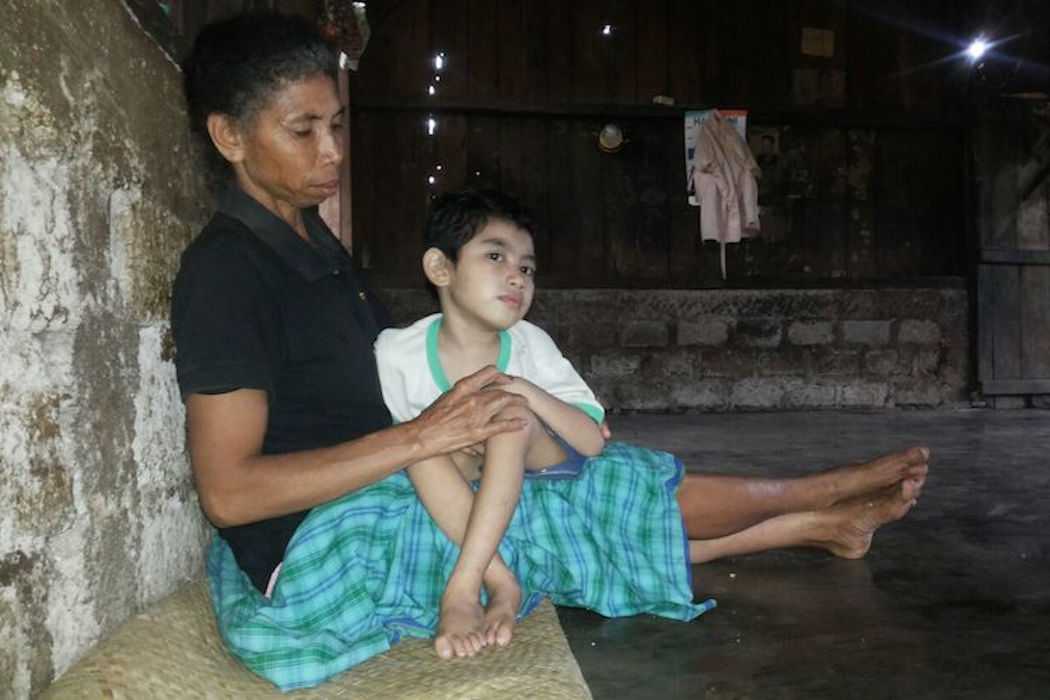 Karonila Krisa Niken, a six-year-old child with stunted growth, is shown with her mother in their home in Mano on Flores Island, Indonesia. (Photo by Nansianus Taris/ucanews.com)

Karolina Krisa Niken was born a healthy baby six years ago but the lack of a nutritional diet has already taken its toll, stunting her development and making it hard for her to walk and eat.

At her home in Mano, in the western part of the Catholic-majority island of Flores, she can only sit or lie down, as her legs are too weak to support her body weight.

For lunch and dinner she eats congee. Every once in a while, if there is enough money, her mother Regina Mamut buys her some milk.

"We don't have any other choice to ensure she survives," Mamut told ucanews.com.

Niken's father works as a farmer earning US$3 a day, which is not enough to support the three of their seven children who still live with the family.

The others decided to seek work to help support the family after graduating from elementary school.

In Nunubena in West Timor, 38-year-old Ribka Tenis feeds her three children corn as their staple diet. They only get to enjoy more nutrition-packed meals when her husband, a subsistence farmer, gets a bumper crop.

"If we don't have enough money we just eat corn mixed with coconut twice a day," Ribka said.

The plight experienced by families like these paints a portrait of the typical struggle many Indonesians face in providing a basic level of health for their families due to low incomes and scarce food supplies as exports of agricultural commodities and fisheries continue to boom.

According to government statistics, agricultural exports jumped from $26.73 billion in 2016 to $33.05 billion in 2017, while the corresponding rise in fisheries exports saw them climb from $3.78 billion to $4.09 billion.

Hilal Elver, the United Nations special rapporteur on food, visited the country from April 9-18 and drew attention to the poor health many Indonesian children wrestle with.

Citing government data, Elver said that 30 percent of all children in the country now suffer from stunted growth.

Elver expressed particular concern for people who live in remote areas but have no land, are mired in poverty, and have limited access to healthy food. They have also failed to benefit from recent efforts to convert forested areas into plantation land. As Papua learned, these measures may have been a boon for large or state-run corporations in this field, but they have left local communities impoverished.

Servasius Servo from Keerom in Papua acknowledged the fact that people are finding it harder to source food these days.

Forests that used to be a haven for local people have been turned into plantations but the people have gained nothing, he said.

According to Pusaka, an NGO that focuses on the rights of indigenous peoples, about 2.1 million hectares of forest have been converted to plantations so far, and another 7 million hectares for logging concessions.

"Small communities just have to sit by and watch. There is nothing they can do. Some are even being evicted," said Father Djonga.

"Malnutrition and a paucity of adequate health services have caused many deaths," he added.

The priest said at least 48 people are known to have died in Saminage, in Yahukimo district, from May to August last year as a result of malnutrition and scant access to a reasonable level of healthcare.

Venansius Haryanto is a researcher at the Sunspirit for Justice and Peace Institute, which said that residents in villages and other remote areas are feeling the pinch.

In the last two decades farmers have had to spend more money on cultivating their agricultural land because of the declining soil fertility rate due to the overuse of chemical fertilizers.

"They generally get money from loans. Unfortunately, their harvests have been quite subdued so they are grateful just to make enough money to pay back their debt," Haryanto said.

"At first glance they seem to be successful farmers, judging by the piles of rice sacks that have accumulated after the harvest. But in reality they sell these off in a matter of days to cover their debt," he said.

He said Lembor on West Flores, known as rice granary, is now also in a state of crisis.

"For instance, in Liang Sola village, 267 of its 352 households are impoverished and rely on government handouts," Haryanto added.

Agung Hendriadi, head of the Food Security Agency at the Ministry of Agriculture, conceded that social inequality and poverty are the root causes of the nation's food problems.

He said the ministry has promoted a number of solutions via its programs, namely its co-called Food Self-Reliance Area and Sustainable Food House projects in remote villages that are hard to reach.

"These programs teach communities how to produce materials for household consumption independently and in a healthy way," he said.

He said they recently launched a new scheme on April 23 dubbed the "agricultural-based poverty alleviation program."

"These are short-term, medium- and long -term solutions," he said.