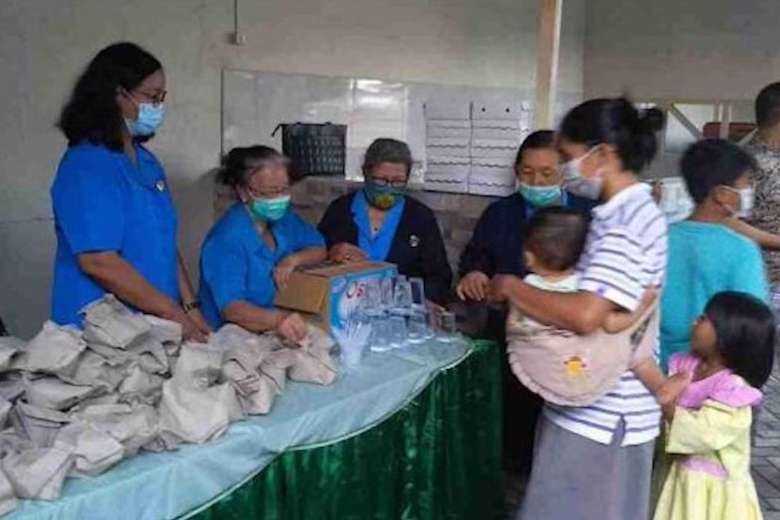 Although Covid-19 is still raging around the world, a Catholic women’s group in Indonesia refused to let the pandemic derail its efforts for interfaith harmony.

Catholic Women of the Republic of Indonesia (WKRI) members from St. Yusuf Parish in Jember, East Java province, have been providing free meals for poor Muslims observing the holy month of Ramadan through their Warung Kasih (love stall) event for nearly two decades.

“This year we are holding the Warung Kasih event to help our Muslim friends even though the Covid-19 pandemic has hit our territory," Valentina Indarti, 68, chairwoman of the WKRI in Jember district, told UCA News.

The WKRI is an independent social organization committed to working for the sake of people's welfare and human dignity.

Established in June 1924, it has about 90,000 members across Indonesia including its chapter in Jember, part of Malang Diocese.

Its members in Jember started the Warung Kasih event in 2003 to serve marginalized and poor Muslims such as street vendors, pedicab drivers, scavengers, beggars and the homeless so that they could break their Ramadan fast.

Muslims never protested because our mission is humanity

They provide the service from Monday to Thursday every week during the Muslim holy month at a clinic compound run by the Congregation of the Sisters of Misericorde, next to St. Yusuf Church, by serving more than 200 meal boxes every day.

They initiated the Warung Kasih event because they saw that poor Muslims could not break their Ramadan fast because they didn’t have money to buy meals.

When it was inaugurated, they invited people from the Hindu, Buddhist, Muslim and Protestant communities, police and local government officials to prevent suspicions among the Muslim community that the service was being used to try to convert people to Christianity.

“Muslims never protested because our mission is humanity,” Indarti said

The group initially served Muslims living around the church but during the pandemic they are traveling further afield to take meals to Muslims’ homes while following health protocols.

“Because of the pandemic situation, we cook rice, vegetables and meats in our respective houses,” Indarti said, adding that Catholics from the parish help to distribute meals.

“The main goal is to build fraternity and tolerance with Muslim friends,” she said, adding the Church supports their activity including the parish priest and Malang Diocese.

“I hope this service can be continued and imitated by Catholic women in other parishes.”

Muslims all over the world abstain from all food and drink from dawn to dusk for the holy month of Ramadan.

Fasting during Ramadan, the ninth month of the Islamic calendar, is obligatory for all adult Muslims, except those who are elderly, sick or traveling. Pregnant and nursing mothers and menstruating women are also exempted.

A fasting Muslim is required not just to avoid food, drinks and sexual intercourse from dawn to dusk but also to practice patience and selflessness, abstaining from all evil including lying, backbiting, cheating, lewd conversation, loss of temper and greed.

The event shows that the Church is present in society by sharing meals in concern, compassion, tolerance and fraternity with Muslims

After observing Ramadan, they celebrate victory in the Eid al-Fitr festival of breaking the fast. This year it falls on May 12-13.

Supriono, 56, a Muslim pedicab driver, thanked the Catholic women for their generosity. “I can take the meals for my family members," he said.

“The event shows that the Church is present in society by sharing meals in concern, compassion, tolerance and fraternity with Muslims even though we are different,” Father Utus told UCA News.

The priest said the event earns respect for Catholics and shows that the Church has empathy for poor Muslims.

She said it is one of the national WKRI’s programs to build tolerance of other religions, tribes and races.