International community must hold the junta accountable and provide a lifeline to ordinary folk in their fight for freedom
Published: December 21, 2021 09:27 AM GMT ▾ Having worked in and on human rights in Myanmar for more than two decades, I have sadly become accustomed to reports of terrible atrocities.

Over the past 20 years, I have traveled more than 50 times to the country and its borders, heard former political prisoners’ stories of torture, met former child soldiers who escaped the Myanmar military and interviewed people used by the army for forced labor.

I have listened to women recount the horrors of sexual violence and rape as a weapon of war and met ethnic and religious minorities who have told me face to face of their experiences of persecution.

I have visited survivors of the genocide unleashed on the Rohingya and those who have endured war crimes and crimes against humanity in Kachin, Shan, Chin, Karen, Kayah, Mon and Rakhine states.

The catalog of crimes committed by Myanmar’s armed forces — known as the Tatmadaw — is unspeakable: and yet it must not only be told repeatedly and heard but also requires a response from the international community.

That is why the footage and testimony released yesterday by the BBC are so important.

For too long, the world has fixated on Aung San Suu Kyi alone. First, we adored her as Myanmar’s heroine under house arrest, a damsel in distress. Then, we lauded her as her country’s liberator.

When the job of transition and liberation proved more difficult than we had hoped, and she made some unhappy compromises and became complicit with atrocities against the Rohingya, her star plummeted rapidly and she fell from being an international star to pariah.

Now, as the eyes of the world once again fall upon her as she stands trial, the discourse remains about her. But it shouldn’t. The discourse, the focus, should be on her country, her people and the cause she once represented.

Please do not misunderstand me. I am not saying we should not pay attention to her trials and her unjust imprisonment. We absolutely should.

Aung San Suu Kyi won with a landslide victory just over a year ago — and for once it was a “general election” in a true sense and not simply, as it had been in the past, an election of generals. She and her party, the National League for Democracy (NLD), won a very legitimate mandate to govern Myanmar.

Her overthrow, arrest, imprisonment and prosecution by an illegitimate, criminal coup staged by the army’s commander-in-chief, Senior General Min Aung Hlaing, is an absolute travesty.

Whatever errors of judgment we think she has made in the past, Aung San Suu Kyi deserves to be in government today and not in jail. Not because of her own sense of destiny and dynasty, as the daughter of Myanmar’s independence leader Aung San, but because the people voted for her.

The charges against Aung San Suu Kyi are too ludicrous to list. On each count, the charges are risible, mendacious and dystopian

That’s why it’s so important to focus on the people of Myanmar, not one individual leader alone.

Yes, we must, once again — as we did throughout the 1990s and early 2000s until her release from house arrest in 2010 — campaign for her freedom. But not only because her trial is so outrageous, her imprisonment so unjust, though that is undoubtedly true, but also because of what her incarceration symbolizes for Myanmar.

To those in the international community who say they are disillusioned with her and so will not speak out now for her, I say this: I was disappointed with her too, but this is not simply about one woman. This is about principles.

To overthrow an elected leader, reject the expressed will of the people and unleash yet another human rights and humanitarian crisis upon a conflict-ridden nation that was just beginning to emerge into fragile new dawn of at least an experiment with liberty is a direct assault on freedom itself — and, as such, it is one which every democrat around the world must oppose.

The charges against Aung San Suu Kyi are too ludicrous to list. They range from using illegal walkie-talkies to accepting thousands of dollars worth of gold to breaking Covid-19 restrictions. On each count, the charges are risible, mendacious and dystopian.

I was not happy with her willingness to defend the Myanmar army’s atrocities against the Rohingya. But I am equally unhappy about that same army’s decision to jail her arbitrarily on entirely trumped-up charges.

This brings us back to the revelations of the atrocities in Kani Township. And they relate to the relentless bombardment by the Myanmar military of Thantlang and, as the Assistance Association for Political Prisoners reports, the killing of over 1,348 pro-democracy activists, the arrest of over 11,000 and the arrest warrants issued for almost 2,000 in the past 10 months since the coup.

And while the fight for freedom must always be home-grown and home-led, the international community must do its part to support it

The lesson to be learned about Myanmar — indeed, any struggle for freedom — is that it is about people, not one person.

One person — or a few people — can help symbolize, galvanize, mobilize and lead, as Nelson Mandela and Archbishop Desmond Tutu did in South Africa, Xanana Gusmao, Jose Ramos-Horta and Bishop Carlos Belo did in East Timor, and Mohammed Nasheed did in the Maldives.

But ultimately, to coin a phrase, we are all in it together and a movement is only successful if it is united, inclusive and recognizes shared solidarity and common cause. And while the fight for freedom must always be home-grown and home-led, the international community must do its part to support it.

The response of the world — from the UN Secretary-General Antonio Guterres, US President Joe Biden, British Prime Minister Boris Johnson and the leaders of the European Union, Canada, Australia, Japan and others — has so far been appallingly tepid, muted and apathetic. Indeed, I would drop the "a" before "apathetic" to indicate the strength of feeling.

An appalling, tragic human rights, humanitarian, economic and undemocratic catastrophe has been unleashed upon the peoples of Myanmar, just when they were beginning to start to struggle to find their feet in the foothills of freedom — and the world must act.

The international community must cut the lifeline to the illegal regime which has a death wish upon its people and hold the junta accountable for its crimes.

And it must provide a lifeline to the brave people of Myanmar, who with their tears and extraordinary courage continue, against the odds, to fight for freedom.

* Benedict Rogers is a human rights activist and writer. He is the co-founder and chief executive of Hong Kong Watch, senior analyst for East Asia at the international human rights organization CSW, co-founder and deputy chair of the UK Conservative Party Human Rights Commission, a member of the advisory group of the Inter-Parliamentary Alliance on China (IPAC) and a board member of the Stop Uyghur Genocide Campaign. He is the author of six books, and his faith journey is told in his book “From Burma to Rome: A Journey into the Catholic Church” (Gracewing, 2015). The views expressed in this article are those of the author and do not necessarily reflect the official editorial position of UCA News.

BIENVENIDO BAISAS
Thie article must be shared to other networks, like La-Croix International! Perhaps Benedict Rogers should tap Avaaz. org for the campaign to champion the demand of the people of Myanmar for democratization of their nation.
Reply 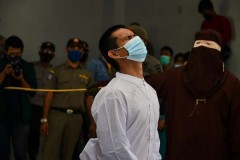 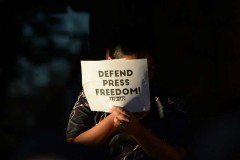 No merry Christmas for Christians in Myanmar