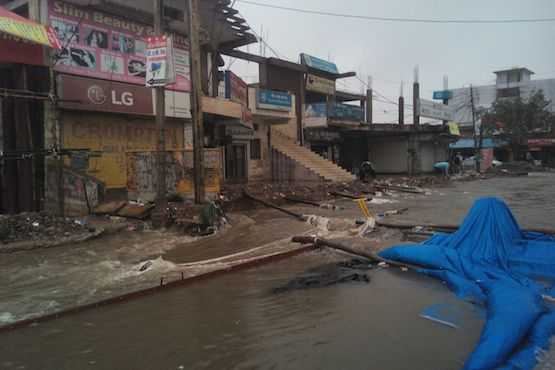 A flooded road in Bhopal, capital of Madhya Pradesh state in central India. Rains in the past five days have killed 22 people. (Photo supplied by Bhopal Archdiocese)

Incessant rains in the past five days have killed at least 22 people in India's Madhya Pradesh state, displacing hundreds of others and submerging homes, schools, hospitals and mission stations.

"Hundreds of houses, churches, schools are flooded displacing people. Mission stations are flooded in many parts of the state," said Father Maria Stephen, public relations officer of Bhopal Archdiocese based in the state capital with the same name. The rains, reportedly the heaviest in 43 years, have flooded the entire city, he said.

Father Stephen said the natural calamity "is a painful situation" for the church in the state but "we cannot do much for affected people" owing to negligible numbers and limited financial sources.

Christians form only 0.29 percent of 72 million people in the state and the majority of them belong to indigenous and Dalit communities who live in remote villages.

"We have deployed church volunteers to help in rescue and relief operations in many parts of the state," said Father Stephen, adding that in several places people are stranded.

The army has moved 400 flood-hit people in the Satna area of the state to safer places. The Satna Diocese’s Bishop’s House, church-run schools and convents are inundated.

"We could not even go out of our houses to help the needy," said Father Martin Punnolilil of Satna Diocese. "It is terrifying," he said adding that roads are under waist-high flood waters.