Without universal mass testing, claims of progress will be unfounded, health authorities say The Philippine Health Department is warning against making Covid-19 progress claims before the results of mass testing across the country are evaluated.  (Photo: Nhac Nguyen/AFP)

It would be premature to say the Philippines has “flattened the curve” in its fight against the coronavirus pandemic before mass testing is established across the country, the Health Department has warned.

Such testing needs to be underway before anyone can begin to suggest that, it said on April 30, suggesting a further lockdown extension may be necessary.

Health Undersecretary Maria Rosario Vergeire said indications show that coronavirus cases will still rise even if lockdowns are lifted or eased on May 15.

“If we look at the numbers we record daily, we can see that they are becoming constant and predictable. It is averaging at between 100 and 200 additional cases per day,” she said.

“It’s dangerous and risky for us to declare now that we are plateauing and we are reaching that peak. We are still not at that point. Even I can tell that.”

The undersecretary cited the lack of testing kits in provinces and regions across the archipelago.

The Health Department says conducting 8,000 to 10,000 tests per day is insufficient in Manila, which has more than 13 million residents, let alone the rest of the country.

“We can only provide reasonable predictions if we have more data. And that data comes from mass testing. So, if mass testing is limited, our data will also be limited,” Vergeire said.

She said the department will recommend that President Rodrigo Duterte maintain an international travel ban due to the pandemic situation abroad.

Religious gatherings, however, could be permitted after May 15 but worshipers would have to observe strict social distancing rules, the undersecretary added. 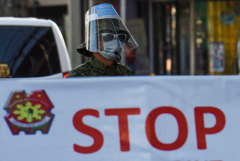 As of April 29, the Philippines had recorded 8,212 Covid-19 cases with 558 deaths, according to government figures.

The bar exam was held at the University of Santo Tomas, the oldest Catholic University in Asia, run by the Dominican order.