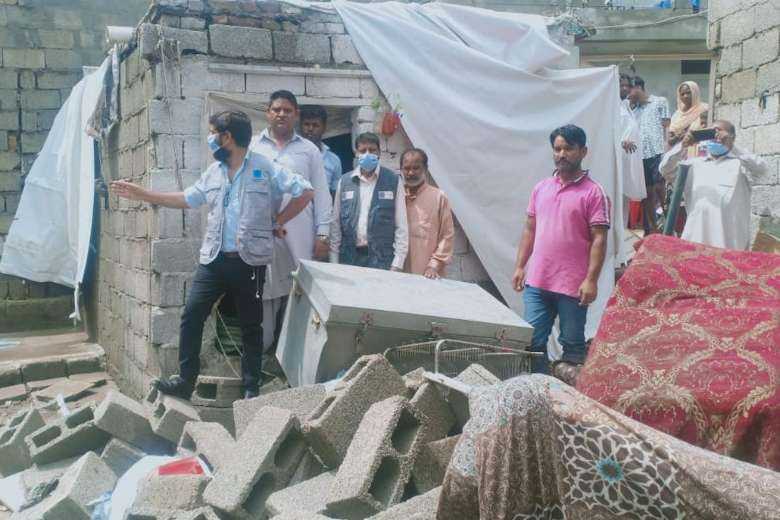 According to the National Disaster Management Authority (NDMA), 88 people died, 118 were injured and 205 houses were destroyed in the flash floods on July 28.

In videos shared on social media, cars can be seen floating on flooded roads of Sector E 11 in Islamabad.

In a tweet, Prime Minister Imran Khan alerted citizens to take special care. “I have also directed all the relevant response agencies including the NDMA to be on high alert with ready and rapid emergency response actions,” he stated.

The emergency response team of Caritas Pakistan Islamabad Rawalpindi, the most affected diocese, visited slums in Nullah Lai in Rawalpindi as well as Islamabad on July 28. They met the family of Iqbal Rehmat, whose house was flooded by more than a meter of water after a landslide near his house.

“We have been awake since six in the morning. As we took out the household items, it felt like a sudden quake as if a hill had fallen. The cattle ran outside. I was injured while saving my children,” said Rehmat, showing a cut on his right foot.

“Three goats have died under the shelter. One of my sisters was swept away by the floodwaters and was found in the nullah [ravine]. She is being hospitalized now.”

Amjad Gulzar, executive director of Caritas Pakistan, said the house of the organization’s executive secretary in Faisalabad was damaged.

“Diocesan units have been directed to provide initial support to survivors. Our volunteers and disaster management committees are sharing preventive measures in hazard-prone areas to spread awareness and save lives,” he told UCA News.

“Delta coronavirus mutation has increased the challenges of the prevalent emergency. Riverine communities used to be affected in the past. Climate change has been causing urban flooding in recent years. The authorities should avoid building housing societies on natural drains.”