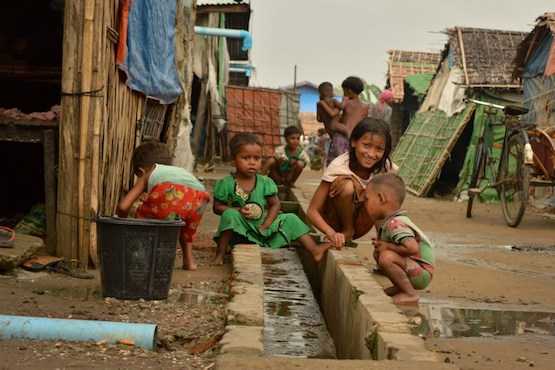 In this photograph taken on July 2, 2016, Muslim Rohingya children at one of the displacement camp in Sittwe located in western Myanmar's Rakhine State. (Photo by Win Moe/AFP)

Thirty-year-old Abbas didn't foresee he'd be forced to live in a ramshackle camp in Myanmar's Rakhine State with 'no employment and no future.'

The young Rohingya man was in his second year at university when he and his family fled from his village near Sittwe — the capital of Rakhine — after anti-Muslim violence erupted in 2012.

Since then, most of his family have stayed in Thetkaepyin camp for internally displaced people (IDP) near Sittwe.

"We have remained in the camps for five years and it's like a prison. I can't foresee a future for myself — there are no job opportunities and we cannot leave the camp. We also can't access education and health care," Abbas told ucanews.com.

Since the events of 2012, Muslims in Myanmar such as Abbas have not been allowed to attend university.

Abbas recalled that he had several Rakhine Buddhist friends and that they studied together before 2012. The Rohingya and Rakhine communities lived together in relative peace back then, he said.

"When can we return to our respective homes? Why can't we live together again?" he asked.

"I don't want to spend my time in a camp. I want to start a new life and go back home and look for work," he said.

Abbas is not the only one. More than 140,000 Rohingya remain interned in squalid camps.

Overall, impoverished Rakhine is home to an estimated 1.1 million Rohingya who are referred to as "Bengalis" by most people in Myanmar who see them as illegal immigrants from neighboring Bangladesh. They are denied citizenship and other basic rights in the Buddhist-majority country.

Thousands of Rohingya also fled Rakhine following the 2012 violence, taking dangerous voyages to Thailand, Malaysia and Indonesia. This largely halted in May of 2015 when Thai authorities cracked down on smuggler networks.

Abbas' younger brother left Rakhine in late 2012 via a perilous boat journey. He eventually made it to the U.S. and manages to send money back to his family in the camp where Abbas — the eldest of ten siblings — must take care of his ailing mother who suffers from diabetes. In this photograph taken on Sept. 7, 2016, Muslim Rohingya family members inside their shelter at the Thetkaepyin displacement camp in Sittwe. (Photo by Romeo Gacad/AFP)

Myanmar's de facto leader Aung San Suu Kyi has been criticized for her continued silence over the Rohingya issue.

Suu Kyi says her government is trying to deal with the issue by implementing recommendations of the Rakhine Advisory Commission led by former U.N. secretary-general Kofi Annan, which called for the closure of the IDP camps and for their inhabitants to return home.

As a first step, the government has closed three IDP camps in Pauktaw, Kyaukphyu and Ramee townships, said Thaung Tun, National Security Adviser to the government in a statement in early July.

Among the closed camps, the largest was in Pauktaw which had 215 Rohingya households. There were 65 families of Kaman Muslims who were sheltering in the Kyaukphyu camp. The now closed Ramee camp housed 65 ethnic Rakhine people, according to media reports.

Aung Win, a Rohingya Muslim from Bume village, near Sittwe, said the closure of three camps effects only a small number of people.

"The government is implementing it with a lack of transparency so I doubt the government's policy," Aung Win told ucanews.com.

It appears the government will take its time to close the 33 camps that remain, especially those near Sittwe where thousands have been sheltered.

Pe Than, a Lower House lawmaker for the hard-line Buddhist party Arakan National, insisted that it is impossible for the Rohingya and Rakhine to live together as fear and distrust remain high.

"The government needs to designate one particular area for resettlement of the Bengalis as it is not an appropriate for Bengalis to return to their villages," Pe Than, an ethnic Rakhine, told ucanews.com.

The parliamentarian blames some rights groups and international NGOs for wanting IDP camps to remain open.

"In comparison with poor ethnic Rakhine villages, the situation of people in IDP camps is better as they at least get food rations and other humanitarian assistance from the international community," said Pe Than.

Furuk, a Rohingya man, doesn't consider himself lucky. He also didn't anticipate that his family would be stuck in an IDP camp for five years.

"I didn't even think our family would end up as internally displaced people. In our earlier life, we lived peacefully and made business with the Rakhine community," Furuk who resides in Dar Paing IDP camp told ucanews.com.

In early July, Furuk told U.N. refugee chief Filippo Grandi, who visited the camp, that the Rohingya IDPs there wanted to return home.

"We want to go back to our homes and get our citizenship for this country and do so as Rohingya, not as Bengali," said Furuk, the father of eight children.

Grandi said in a statement on July 6 that the crucial first step for those in camps to have freedom of movement and access to services and livelihoods.

"Accelerated pathways to citizenship are also part of the solution, as are efforts to tackle exclusion and poverty," said Grandi.