Papuan students and activists march to the presidential palace in Jakarta on Aug. 28, 2019, to protest against alleged racism against Papuan students in Surabaya, East Java, a few days earlier. Five activists arrested at the protest have just been released by Indonesian authorities (Photo courtesy of Amnesty International Indonesia)

Five Papuan activists imprisoned for treason have been released from jails in Jakarta after completing their sentences.

Michael Hilman, their legal adviser, told reporters on May 28 that Eleopere was freed from a women’s prison on May 27, while the four men were released on May 26.

“They remain committed to speaking out against injustice against Papuan people,” he said.

The protest where they were arrested on Aug. 28 last year was staged in response to alleged racial abuse leveled against Papuan students in Surabaya, East Java, a few days earlier.

The Central Jakarta Court found them guilty of violating treason laws and jailed them for 8-9 months.

The five were due to be released on May 12 but authorities delayed their release without giving a reason, prompting an outcry by rights groups.

Amnesty International Indonesia’s executive director Usman Hamid questioned why they were imprisoned in the first place.

“There was no reason to jail them. They just expressed their views, a right that is protected by international human rights law,” he said.

According to Amnesty, there are 55 Papuan prisoners of conscience still in jails. 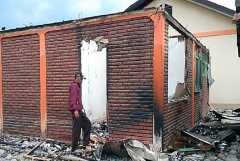 “The government should free all political prisoners, unconditionally,” Hamid said.

“It will boost the morale of other political prisoners in their struggle for justice and truth for the people of Papua,” he told UCA News.

People who are jailed for fighting for justice and truth will always get public support, he said.