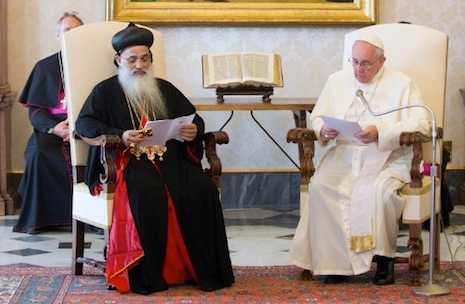 Malankara Orthodox Syrian Church head Catholicos Baselios Marthoma Paulose II meets Pope Francis at the Vatican in 2013. He has suspended five priests after they were accused of sexually abusing a mother of two and blackmailing her. (Photo by AFP)

India's Malankara Orthodox Syrian Church has suspended five priests following allegations that they sexually abused a mother of two children by using her confession secrets to blackmail her.

Catholicos Baselios Marthoma Paulose II, head of the church based in the southern state of Kerala, has removed all five priests, including one from its Diocese of Delhi, church spokesman P.C. Elias told media on June 25.

"We have received a complaint against certain priests. We do not know what is the truth. We will conduct an inquiry and take further action if there is any substance in the allegations," he said.

The church has not revealed the identity of the suspended priests.

The scandal erupted when an audio clip of a telephone conversation, purportedly between the woman's husband and a church official, went viral on social media.

It is alleged a priest had sex with the woman after threatening her with breaking the "seal of confession" to reveal some of her confession secrets to her husband. He allegedly video-recorded the sex act and passed the information and video to another priest, who also used it have sex with the woman.

The husband, a resident of Tiruvalla in Pathanamthitta district, named the five priests. According to the audio clip in the Malayalam language, the man claimed at least eight priests sexually abused his wife, and he has proof against five.

The church, also known as the Indian Orthodox Church, is an autocephalous Oriental Orthodox church, one of the seven churches including two Catholic ones that trace their faith to St. Thomas the Apostle, who according to their tradition preached in southwest India in 52 A.D.

The church now has 30 dioceses, including seven outside the state and three abroad. The church allows its priests to marry and enjoy family life. The marital status of the accused priests is unknown.

The sexual abuse started after the woman confessed her relationship with a priest in her parish that started even before her marriage.

The woman's husband said he came to know of the affair after he found a room bill for a five-star hotel in his wife's name. The woman spilled the beans after he confronted her with the bill, he said.

The man said he will pursue the case until all the priests are removed from the church. He did not go to police as he did not want to defame the church.

He also alleged there was pressure on him from church officials and influential people within the church to withdraw his complaint.

Church officials said it was the first time an allegation had been leveled against priests misusing the seal of confession in the 2,000 years of their church's history.

Father Mathew Abraham, chairman of the church management committee, said he cannot believe that any priest in the church would break the seal of confession.

"I don't think anyone would do anything to destroy the sanctity of the Sacrament of Penance. Most of our priests are living with their families and leading a pious life," the priest told ucanews.com.

He said it was difficult to believe that a priest would take a woman to a five-star hotel. "It is not easy for priests to indulge in sexual activities in the era of advanced communication."

He suspects the allegations may be part of a lobby trying to damage the reputation of the church, which is engaged in a legal battle with the rival Jacobite faction over control of the church and its properties in the wake of the division over allegiance to the Patriarch.

Father Abraham said the complainant had a bad track record. He had once created a ruckus in the parish committee and tried to assault a priest. The faithful in the parish had turned against him following the incident and he could be taking revenge by raising baseless allegations, the priest said.

However, he asserted that the church is committed to finding the truth about the allegations.