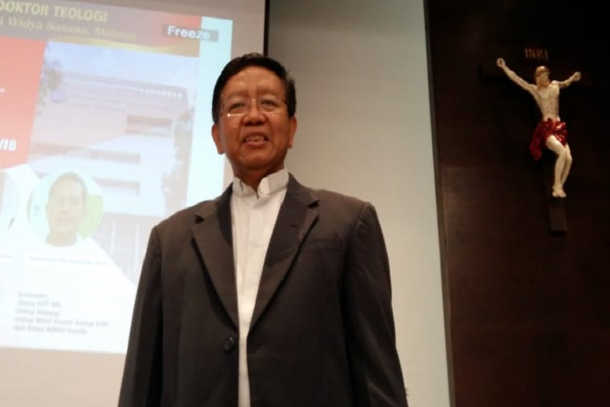 A school of philosophy and theology co-managed by the Congregation of the Mission (CM) and the Order of Carmelites (OCarm) in Indonesia’s East Java province has launched a doctoral program in theology, the first of its kind in the country.

The Widya Sasana School of Philosophy and Theology in Malang city launched the program on Aug. 23, during which the secretary of the Directorate General for Catholic Community Guidance, Aloma Sarumaha, officially handed over the operational permit to the school’s rector, Vincentian Father Fransiskus Xaverius Eko Armada Riyanto.

Known as Bimas Katolik, the directorate is the department in the Religious Affairs Ministry that caters to the Catholic community.

“This doctoral program in theology is historically the first of its kind in the scope of Catholic higher education in Indonesia. We see this development as a step forward,” Father Armada told ucanews.com.

“The need for Catholics with doctorate degrees in theology is very well established in Indonesia. Here there is only one Catholic layman with a doctorate degree, but it is in the ministry. So this program is very much needed for the sake of the development of human resources within the Catholic Church.”

According to the priest, the school took about two years to prepare all the government’s requirements for the new program, including the availability of two professors. It is also allowed to recruit part-time lecturers, including Professor Doctor Adrianus Sunarko, who serves as bishop of Pangkalpinang and chairman of the Indonesian bishops’ Commission for Theology.

“When this doctoral program in theology begins in September, there will be experts in theology from various [educational] institutions in Indonesia and abroad,” Father Armada said, adding that the new program would have at least 12 students from around the country.

Course 'will be relevant to today'

The new program was welcomed by Franciscan Bishop Sunarko, a professor of systematic theology at the Driyarkara School of Philosophy in Jakarta.

He hoped that the new program would produce theological reflections which are relevant to the situation in Indonesia.

“Theological reflections should always respond to new challenges faced by the faithful in Indonesia,” Bishop Sunarko told ucanews.com. “Let’s call it pluralism and relationships among religious followers, ecology and poverty. These three challenges will continue to face by the faithful in this country.”

In addition, the prelate said, the new program should be able to produce Catholics with doctorate degrees in theology “who can productively write down their thoughts and encourage other Catholics to face the challenges in accordance with their Catholic faith."