First La Vang shrine in US gathers thousands of Vietnamese 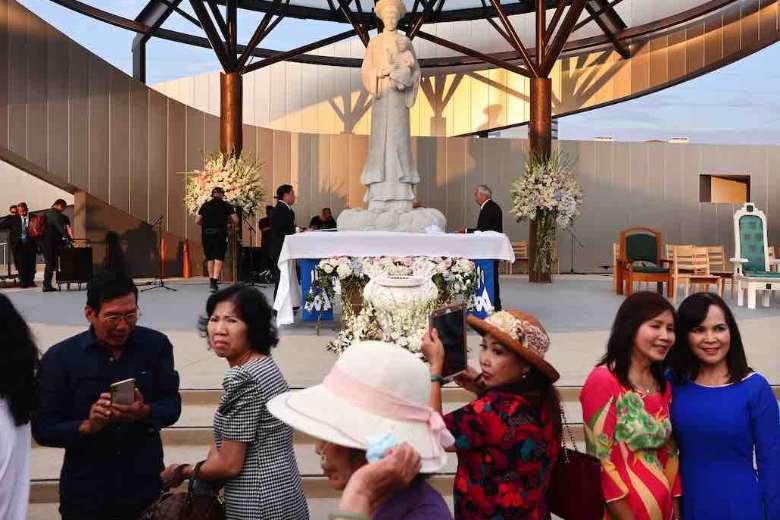 Catholics take photos after the unveiling of the Our Lady of La Vang Shrine at Christ Cathedral on July 17 in Garden Grove, California. (Photo: Mario Tama/AFP)

Thousands of Vietnamese immigrants gathered to witness the opening of the shrine of Our Lady of La Vang, patroness of Vietnamese Catholicism, in California in the United States.

An estimated 8,000 people attended the July 17 opening of the shrine, considered the first standalone La Vang shrine in the US, reported Religion News Agency.

The $12.6-million, 12-foot-tall statue, placed in the Christ Cathedral in the Diocese of Orange, will serve as a meeting point for some 100,000 Vietnamese-American Catholics in the diocese.

The shrine was built after a worldwide financial campaign in which more than 5,000 people participated.

Vietnamese Catholics began their devotion to Our Lady of La Vang after a Marian apparition to persecuted Catholics in a Vietnamese forest in 1798.

Catholic means universal. All of us belong to the Church in its universality

At the end of the Vietnam War in 1975, which saw more than a million Vietnamese become refugees, the Marian intercession was credited with saving the lives of her devotees.

For Vietnamese Catholics, Our Lady of La Vang “is like the Lady of Guadalupe” for Mexicans. “That's how big it is," 48-year-old Deborah Tran was quoted as saying by the Religious News Service.

"She [La Vang] symbolizes perseverance and standing up for what you believe in."

Tran, no longer a practicing Catholic, and her family came to witness the opening of the shrine. 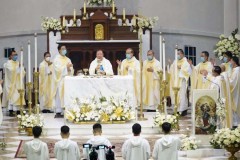 Bishop Kevin Vann of Orange said that the shire is an encounter with “the Lord and his mother, Our Lady of La Vang."

Archbishop Christophe Pierre, the papal nuncio to the US, addressed the faithful, saying, "We are the Church."

"Catholic means universal. All of us belong to the Church in its universality," Pierre added during the opening function, which included a Mass.

Vietnamese Catholics play a vital role in the growth of the Church in the US.  They account for 10 percent of vocations to the priesthood in recent years, RNS reported, quoting Religious and Ethics Newsweekly.

Thousands of Vietnamese fled to the United States following the Vietnam War, with some finding refuge in Catholic homes and churches in California and other states.