The hat of the late Cardinal Rufino Santos will be hung inside Manila Cathedral on Sept. 3. (Photo by Angie de Silva)

A tasseled red hat called a galero belonging to the first Filipino cardinal will be raised to the rafters of Manila Cathedral, which the late prelate help rebuild after the Second World War.

The broad-brimmed hat of Cardinal Rufino Santos of Manila was recently discovered in a corner of the archdiocese's museum stock room.

"Perhaps [by] some stroke of divine providence ... it was found still [in] its original box with the label of maker Tanfani and Bertarelli in Rome," read a statement from the cathedral, adding that it was a "very timely discovery."

Manila Cathedral, officially known as the Minor Basilica and Metropolitan Cathedral of the Immaculate Conception, this year celebrates the 60th anniversary of its rebuilding.

To honor Cardinal Santos, his galero will be hoisted to the cathedral's rafters on Sept. 3, the 45th anniversary of his death. A cardinal's hat is traditionally hung inside his cathedral after his death.

"When it fell, it was placed in the museum," said Archbishop Socrates Villegas of Lingayen-Dagupan, former president of the Catholic Bishops' Conference of the Philippines.

Born in a family of seven children in Guagua in Pampanga province in 1908, Cardinal Santos entered Manila Cathedral Parochial School at the age of nine and later enrolled at San Carlos Seminary in Manila with the aid of a scholarship.

In 1927, he went to Rome to study for a doctor of sacred theology degree from the Pontifical Gregorian University. He was ordained a priest in the Basilica of St. John Lateran in Rome in 1931. 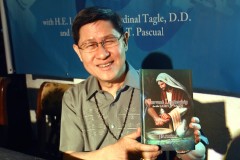 He became an auxiliary bishop of Manila in 1947 before becoming archbishop in 1953. He received the red hat from Pope John XXIII in 1960 and became the first Filipino cardinal.