Myanmar’s military has reported the first confirmed case of Covid-19 in the ranks of the armed forces as a soldier tested positive for the coronavirus.

The office of the military chief announced on May 4 that the soldier has been quarantined at a military hospital in the country's remote capital Nay Pyi Taw since May 1.

The soldier is in a stable condition in the hospital designated for Covid-19 patients.

Five officers who are undergoing military training in Moscow, Russia, have also tested positive for the disease.

“They are in good health and are receiving medical treatment at a health center near Moscow by the arrangement of the Russian Health Ministry,” the military announcement said.

As of May 4, Myanmar had reported six more patients including a soldier tested positive for Covid-19, bringing the total number of cases to 161 including six deaths and 43 recoveries.

Myanmar’s military, known as the Tatmadaw, has imposed restrictions and prohibited travel at military commands across the country since March.

Tatmadaw-run hospitals in Nay Pyi Taw and Yangon, the country’s commercial hub, have been turned into quarantine centers.

They have also offered to use its two COBAS 6800 machines for Covid-19 testing in Nay Pyi Taw and Yangon.

The Health Ministry recently installed a COBAS 6800 machine donated by a private donor that can test around 1,300 people within 24 hours. It is expected to run in the first week of May. 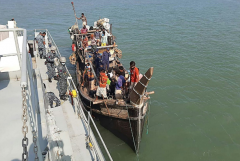 Soldiers have also disinfected churches, monasteries and temples while senior officials were meeting with religious leaders over Covid-19 prevention.

The military chief’s office said the move is as part of a collaboration with the government in responding to the contagion.

After ruling Myanmar with an iron fist for decades, the military still wields enormous power through its control of the defense, home affairs and border ministries.

Under the 2008 constitution, military MPs, who control 25 percent of the seats in the legislature by appointment, have a key veto in blocking any proposed charter changes, especially provisions that would curb their political power.

Aung San Suu Kyi’s government and the military have been facing pressure from the international community over the bloody crackdown that led to more than 700,000 Rohingya Muslims fleeing to Bangladesh.

Lee said Myanmar and its security forces must abide by the provisional measures of the International Court of Justice (ICJ) and its own presidential directive to respect the Genocide Convention.

This month Myanmar is due to report back to the ICJ to present the measures it is taking to protect the ethnic minority.

Gambia filed genocide charges against Myanmar at the ICJ and Suu Kyi herself went to The Hague last December to defend her country's reputation.