Cameroon’s first cardinal Christian Tumi died on Good Friday in a clinic in the city of Douala. He was 91.

The prelate, made cardinal by Pope St. John Paul II in 1988, was known for his efforts to find a peaceful solution to the strife between the English-speaking and French-speaking population in Cameroon.

Cameroon, once a British-ruled territory, is known for the unrest between its Anglophone regions in the northwest and its French-speaking regions. English speakers form some 20 percent of the population.

Cardinal Tumi championed democracy in the African nation. In November 2020, he was kidnapped but was set free later.

“I wish to express my condolences and my union in prayer with the College of Cardinals, the family and friends of the deceased, as well as with all those who mourn him,” it said.

Cardinal Tumi “left an unforgettable mark on the Church and on the social and political life” of Cameroon, the pope said.

“He was a faithful collaborator of the popes, assuming various offices in the Roman Curia,” wrote Pope Francis. 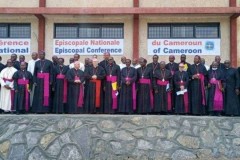 Cardinal Tumi headed the bishops' conference in Cameroon from 1985 to 1991 and served as president of the Symposium of Bishops’ Conferences of Africa and Madagascar from 1990 to 1994.

He was awarded the Nelson Mandela prize for building peace and justice in Cameroon in 2019.