Father Anthony Yao Shun has finally celebrated his ordination, nine years after he was approved by the Vatican 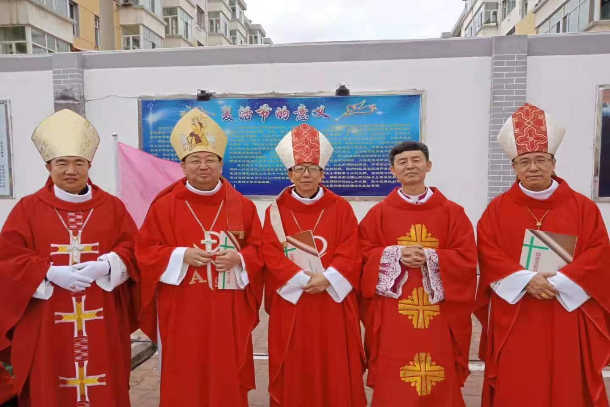 The first ordination of a bishop since the 2018 China-Vatican provisional agreement has taken place in Jining Diocese, Inner Mongolia.

Father Anthony Yao Shun, 54, of Jining Diocese was ordained at the Our Lady of Rosary Cathedral in the city of Jining on Aug. 26.

The ceremony was held by Bishop Paul Meng Qinglu of Hohhot, a vice-chairman of the Chinese Catholic Patriotic Association (CCPA), and concelebrated with Bishop Matthias Du Jiang of Bameng in the same region, Bishop Paul Meng Ningyou of Taiyuan in Shanxi province and Bishop Joseph Li Jing of Ningxia in Ningxia Hui Autonomous Region.

An approval letter by the Bishops’ Conference of the Catholic Church in China (BCCCC) was read out during the ceremony, declaring that Bishop Yao had been elected “according to the tradition of bishop election by the Holy Church and the regulation of the BCCCC.”

“After verification and a valid election, we give an official approval now. This candidate was approved by the pope," it continued.

According to the local source, the ceremony was overseen by minimum government security and ran smoothly. More than 120 priests concelebrated with 50 nuns together and more than 1,000 Catholic attended the Mass.

A diocesan priest, who identifies himself as Joseph, noted that their diocese had focused on evangelization and connection with local Catholics.

“God uses bishops as a visible sign to lead us and manage the Church. I think Bishop Yao has plans for how to develop the diocese development,” Father Joseph told ucanews.com.

Another priest from the diocese, who identifies himself as Peter, told ucanews.com that he hoped Bishop Yao would lead the Church’s quest for more space to allow it to develop.

Bishop Yao is a former vicar general of the diocese, which has about 70,000 faithful, led by 31 priests and 12 nuns; he was elected by church members on April 9.

Although he is the first ordained bishop since the China-Vatican agreement was signed in September 2018, Bishop Yao was actually secretly approved by the Vatican long beforehand, in 2010.

A further 20 bishop candidates have been approved by the Vatican and are waiting for their appointments to be ratified by the Chinese government.

Bishop Yao was ordained as a diocesan priest in 1991 and taught at the National Seminary, studying liturgy at St. John’s University in New York and returned to the diocese in 2010.