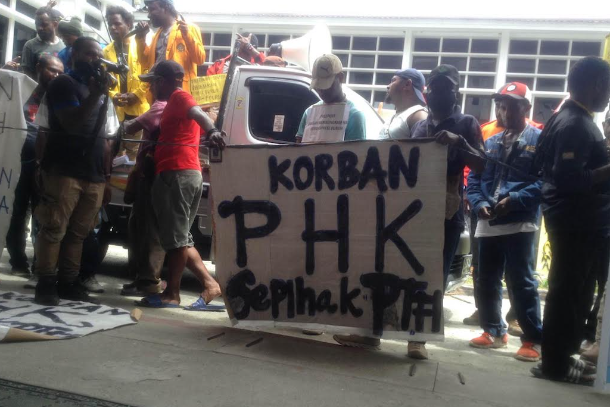 Fired Freeport workers, accompanied by university students, seek legislators' intervention over their fate at a rally in front of the legislative building in Jayapura on Aug. 21. (Photo by Benny Mawel)

They represented more than 8,000 contractors and workers who were laid off by the giant gold and copper company more than 14 months ago following a strike.

"The company fired us unilaterally. We only received the news by text messages. Until now we don't know the reason why we were fired," Yosepus Talakua, who coordinated the protest, told ucanews.com on the sidelines of the rally in front of the legislative building in Jayapura, capital of Papua province.

He claimed the company only paid workers' last salaries and did not provide severance pay.

Talakua said many former Freeport workers had to work as motorcycle taxi drivers and laborers to meet their daily needs. "But we still cannot afford our children's school tuition," he said.

Another protester, Ningsih Wanggai, said she has been jobless since being laid off. "I have just stayed at home," said the former heavy equipment operator.

A similar rally was held by dozens of fired Freeport workers in front of the presidential palace in Jakarta.

Responding to the protesters' demand, legislator Laurenzus Kadepa said the provincial legislative body will form a special committee to review the case. "We will fight for you," he told protesters.

Freeport spokesman Riza Pratama said the lay-offs were the result of a contractual dispute between the Indonesian government and the company.

He said the dispute had reduced operations at the company by about 60 percent and stemmed from Indonesia seeking to change mining industry regulations over ore processing and foreign ownership. Bishop speaks up for workers in Indonesian mining dispute "We offer former workers an opportunity to work again for the company through contractors or an industrial relations court instead of a political path," Pratama said.

PT Freeport-McMoRan obtained its first contract to operate in the region in April 1967, two years before Papua was annexed by Indonesia following a controversial 1969 referendum. A second contract was given in December 1991. In 2014, the company obtained its third contract, which will expire in 2021.

The Indonesian government has owned a 51 percent share of the company since July after tough negotiations. The company previously owned 90.64 percent of PT Freeport Indonesia's shares.