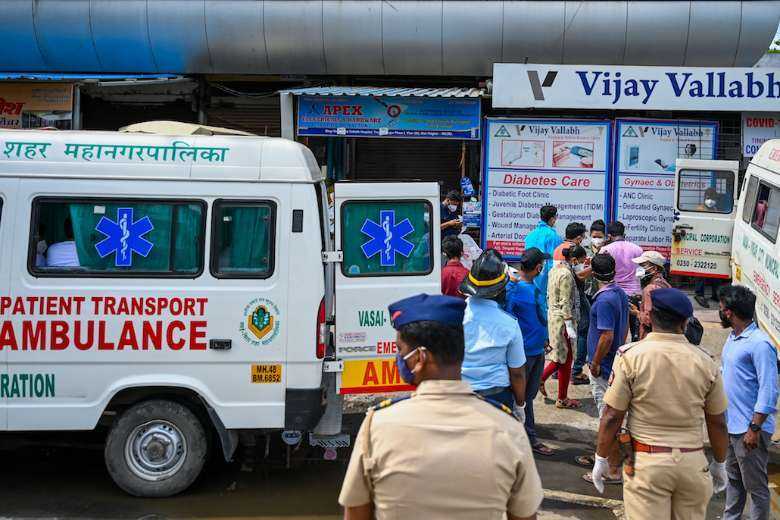 Policemen stand guard as hospital workers move patients from the Vijay Vallabh Hospital in Virar on the outskirts of Mumbai on April 23 after a fire killed 13 coronavirus patients. (Photo: AFP)

A fire in a hospital in India's Mumbai city has killed 13 Covid-19 patients, adding to the challenges of spiraling pandemic cases in Maharashtra, India's richest and most industrialized state.

The accident on April 23 in Vijay Vallabh Hospital in state capital Mumbai comes two days after 22 Covid-19 patients died after an oxygen leak led to a drop in air pressure to ventilators at a hospital in Nashik in Maharashtra.

The fire started around 3am due to a short-circuit in the hospital's intensive care unit (ICU), said Vivekanand Kadam, a senior officer in Mumbai’s Disaster Control Cell.

Officials told media that there were 90 patients in the hospital, including 18 in the ICU. The surviving patients were moved to other hospitals.

Eyewitnesses said smoke filled the ICU, causing suffocation and the collapse of the ceiling.

Family members of the deceased were seen wailing inconsolably outside the hospital.

"Thanks to the utter callousness of the Maharashtra government, Covid-19 patients in Mumbai and other cities are not only battling the killer virus but also have to fight the system and are left helpless,” said Dhananjay Mahadik, a leader of the pro-Hindu Bharatiya Janata Party.

Prime Minister Narendra Modi expressed his condolences and approved an ex-gratia payment of 200,000 rupees (US$2,650) from the Prime Minister's National Relief Fund to the families of those who have lost their lives.

Congress party leader Rahul Gandhi urged party workers to assist all those in need and appealed to the state government to provide all necessary assistance.

Congress, which has criticized the Modi-led federal government in New Delhi for failures to check the pandemic’s spread, is a key partner in the coalition that runs the Maharashtra government headed by regional party Shiv Sena.

Modi canceled election rallies in West Bengal in eastern India on April 23 and will be chairing a series of high-level meetings to review the Covid-19 situation.

Mumbai, a city of 12 million people, is India’s commercial and entertainment capital. The city is known for its cramped living quarters and congested workplaces and public places because of the overwhelming presence of its working-class and poor from all across the country.

"Mumbai's buildings including malls and hospitals often face these fire mishaps. No actions are taken. Often it is found the mandatory fire safety norms are not adhered to,” city resident Rahul Malakar told UCA News.

Nine people died in March in a fire that lasted for 42 hours in a Mumbai mall.

In another tragedy, 10 infants died at a Bhandara hospital in rural Maharashtra in January after a fire broke out at a newborn care unit.

Maharashtra has recorded the highest number of Covid-19 cases and fatalities in India. It reported 67,013 new cases and 568 deaths on April 23.

India has reported more than 16 million cases and nearly 187,000 deaths since the infection began to spread early last year. With more than 300,000 new cases adding daily, India has topped the world in the number of cases this week.