Pope Francis never gets tired of reminding Catholics not to give up hope. (Photo: Unsplash)

A prominent symbol during Holy Week is the big white Paschal candle that is lit during Easter vigils.

Paschal comes from the Latin word “pascha” which means “Passover” in Hebrew, a concept related to the salvation of the Israelites’ firstborn from the angel of death during the time of Moses.

The Paschal candle, therefore, reminds Catholics of their salvation, particularly Jesus’ resurrection that has saved them from eternal damnation.

There is a reason why the Paschal candle is the largest candle inside a church. It symbolizes Christ. It also bears the cross to symbolize Jesus with the Greek letters alpha and omega that symbolize that God is the beginning and the end.

There are also five grains of incense (often in red) to represent the five wounds of Jesus from the nails that pierced his hands and feet, the spear that was thrust into his side, and the crown of thorns on his head.

The Philippines is often hit by huge storms. Its Covid-19 infection rate has seen more than 10,000 new cases per day in recent weeks, while the rate of vaccination is slow.

Medical facilities are overwhelmed by the number of elderly and are without sufficient vaccines for the poor. Doctors are also frustrated about not being able to treat everyone.

The suffering among those with the least in Philippine society is like a sign that evil has permeated the country. There is a very strong temptation to give up and not to hope.

Pope Francis never gets tired of reminding Catholics that we should not give up. There is hope and humanity has faced and survived worse pandemics before. 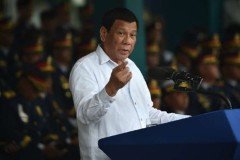 “Where all seems to be dead, signs of the resurrection suddenly spring up. It is an irresistible force. Often it seems that God does not exist: all around us we see persistent injustice, evil, indifference and cruelty. But it is also true that in the midst of darkness something new always springs to life and sooner or later produces fruit ... Such is the power of the resurrection, and all who evangelize are instruments of that power,” the pope wrote in his encyclical Evangelii Gaudium (The Joy of the Gospel).

When we look at a Paschal candle even on television, may it serve as a symbol of hope.

We can begin by remembering the little graces of blessings that we receive from the Lord each day. Let us be thankful for these graces. Every time we say our thanks for receiving grace from God, no matter how small, we are lighting our own candles of hope.

Easter is also about overcoming fear. Jesus’ resurrection overpowered his disciples’ fear from death and persecution. Easter is not a time for fear but a time of trusting in God’s fidelity to his people.

With the passing of this year's Easter, let us remove our fears by trusting in medical research rather than in fake news. Irrational fears paralyze people from doing good. Fear prevents us from being generous and charitable to the needy.

The apostle Paul encountered the same experience but learned to trust in the Lord.

“What a wretched man I am! Who will rescue me from this body that is subject to death? Thanks be to God, who delivers me through Jesus Christ our Lord!” said St. Paul to the Romans.

History teaches us that only Jesus is king. Many empires, monuments built by kings to commemorate their “greatness” have vanished. The Babylonian, Persian and Roman empires are but eras in history. Gone was the glamor of mighty Rome and its elite soldiers. Gone were the intricate Persian walls depicting its army.

Only Jesus remains and has continued to shine even in the darkest moment in history.

Hope is the antidote of fear. No matter how bleak our situation is, we must learn to put our trust in the one true king.